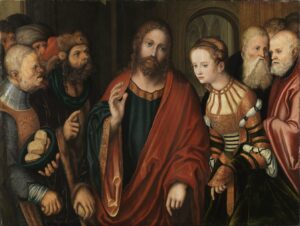 Christ used questions to enter more fully into the lives of others and to help people look at the state of their hearts.

Malcolm Muggeridge, the renowned 20th-century social critic and British journalist, was an unlikely convert to Christianity. For most of his life, he was an agnostic; faith for him was “infinitely unattainable.” But attain it he did, late in life, and in 1975 he wrote, “The coming of Jesus into the world is the most stupendous event in human history.”

Twenty centuries after his birth, Jesus still holds a revered place in the hearts of billions of people. I am among them. I imagine that it has influenced almost every area of my life, like food coloring dropped in water.

Among the things that have long fascinated people about Jesus and explain his enduring appeal is his method of dialogue and teaching. He asked a lot of questions and told a lot of stories in the form of parables. In fact, parables form about a third of Jesus’ recorded teachings. The Gospels were written decades after he died, so his questions and parables clearly left a deep impression on those who bore testimony to him.

Martin Copenhaver, a retired president of Andover Newton Theological School, claims in his book “Jesus Is the Question” that Jesus was more than 40 times as likely to ask a question as answer one directly, and he was 20 times as likely to offer an indirect answer as a direct one. “Oh my soul, be prepared for the coming of the Stranger,” T.S. Eliot wrote in “The Rock.” “Be prepared for him who knows how to ask questions.”

Some of Jesus’ questions were rhetorical; others were meant to challenge or even provoke. In some cases, Jesus used questions to parry attacks by religious authorities who set traps for him. In others, he used questions to enter more fully into the lives of others and to help people look at the state of their hearts. He asked people about their fears and their faith. Jesus used questions to free a woman caught in adultery from condemnation and to inquire whether people considered him to be the Messiah. He probed deeply into questions not many had asked before him, like “For what is a man profited, if he shall gain the whole world, and lose his own soul?”

Jesus liked to turn the tables on his interlocutors, especially those who were in the business of asking questions themselves. In Luke, an expert in the law asked Jesus, “Teacher, what must I do to inherit eternal life?” His reply took the form of not one question but two: “What is written in the law?” and “How do you read it?” But that’s hardly the end of the exchange. We’re told that this person wanted to justify himself; Jesus moved the conversation to a very different plane, from the abstract to the personal. When the lawyer asked, “Who is my neighbor?” Jesus asked what it meant to him to be a good neighbor. By the end of this cross-examination, Jesus had led his interlocutor – first through his questioning and then via the parable of the good Samaritan – to acknowledge that the person who is a good neighbor is the one who shows mercy. It is an astonishing interaction.

As for his use of parables, in “Jesus Through Middle Eastern Eyes” the theologian Kenneth Bailey wrote, “Jesus “created meaning like a dramatist and a poet rather than like a philosopher.” The author refers to Jesus as a “metaphorical theologian” whose “primary method of creating meaning was through metaphor, simile, parable and dramatic action rather than through logic and reasoning.”

Jesus, when asked by his disciples in Matthew 13 why he spoke in parables, indicated that it was to reveal the truth to some and to hide the truth from others. He was willing to disclose the truth to those who were sincere but wanted to conceal it from people not willing to honestly wrestle with its meaning. Jesus also clearly understood the power of stories to make his words more memorable by making them more personal.

“Arguments may form our opinions, but stories form our love,” Cherie Harder, the president of the Trinity Forum, told me. She added, “Stories ask us to enter another world – which usually has the result of broadening or disrupting our own.”

Jesus’ parables provide layers of meaning: There is enough richness and ambiguity in them that people could spend a lifetime reading them and taking different things from them. Bobby Gross of InterVarsity Christian Fellowship told me, “Parables and questions invite us – require us – to think, to ponder.”

With his puzzles and paradoxes, Jesus is trusting our discernment, knowing that the Bible includes contrasting approaches on matters ranging from why people suffer to keeping the Sabbath to how we should treat our enemies. As the theologian Kenton Sparks put it, “At face value, Scripture doe not seem to furnish us with one divine theology; it gives us numerous theologies.”

I wonder, too, if Jesus, in telling parables, might have had in mind what Emily Dickinson described when she wrote, “Tell all the Truth but tell it slant/Success in Circuit lies.” So much more so when she closes her poem by saying, “The Truth must dazzle gradually/Or every man be blind.”

Kerry Dearborn, a professor emerita of theology at Seattle Pacific, told me that in terms of the ways in which Jesus communicated, “I’m convinced he used questions and stories as a means of connection and transformation – to awaken us, to whet our appetites, to invite us to draw nearer, that we might open up more fully to God and to God’s purposes in and for us.”

“With his use of everyday elements of life, people felt seen,” Ms. Dearborn added. “With his powerful depictions of a father who loves prodigals, tax collectors and Samaritans, people were comforted and felt safe enough to follow him. And hearing stories of the ways in which God stands on the side of the oppressed, people would know they could trust this God of both justice and love.”

Philip Yancey, the author, most recently, of the memoir “Where the Light Fell,” said that “the aspect of Jesus’ style that stands out to me is how unpropagandistic he was. Imagine: He knew the truth more than anyone who has lived and could have responded with dogma and fiat, as the church so often has done in his place. Instead, he was anything but an arm twister.”

Mr. Yancey went on to point out in so many places, Jesus makes it impossible for us to conclude, “I’m OK. I can relax.” Whether it’s Jesus’ teachings on anger or lust or his command that we be perfect as his father in heaven is perfect, “no one can reach that place of spiritual superiority that Jesus holds out, which was his point, exactly. We don’t earn God’s grace; we receive it.”

William Fullilove, a pastor at McLean Presbyterian Church, where I worship, put it to me this way: “Jesus was after our hearts, not just our minds. He was after lives changed, not just intellects grown.”

Jesus used stories, then, but he was also part of a story, one that contains thousands of characters and unexpected twists and turns, different genres (poetry, prophecy, epistles, wisdom literature) and countless subplots. But the Bible is also, above all, a metanarrative – the unfolding of a story God has entered, most conspicuously in the person of Jesus, a drama that has purpose and direction. That has been, at least for some of us, a source of comfort, especially in moments of grief and great pain.

Kate Bowler, an associate professor at Duke Divinity School who was diagnosed with Stage 4 colon cancer at the age of 35, told me, “Jesus’ tender birth and violent death leave the problem of suffering unanswered until the end of days. we must learn to live and die in the not-yetness of suffering and empire, fear and uncertainty. But our questioning hearts in the face of evil is not an affront to faith. Jesus simply says: Wait. All will be revealed.”

Mark Labberton, the president of Fuller Theological Seminary, explained to me that trauma is like broken glass – shards in our lives that can randomly and repeatedly cut us inside. The trauma needs to be named and gradually integrated into a person’s life, and if possible, for those who are able, it helps for the trauma to be put in the context of being part of a larger story. For some people, that larger story need not have a faith component; they are able to create meaning without it. But for others, having their trauma understood not as a random, awful event but rather as a very difficult chapter in a larger and ultimately redemptive story can be life-giving.

Christmas is meaningful, for those of us of the Christian faith, because it situates each of our lives – the joys and the sorrows, the hope and the despair, the dramatic and the mundane – in a larger narrative: Not only did God author it; the son of God became a protagonist within it.

Mr. Wehner, who served in various roles in the three Republican administrations before the Trump administration – Ronald Regan’s, George H.W. Bush’s and George W. Bush’s –  is a contributing Opinion writer. Peter Wehner attends McLean Presbyterian Church in McLean, Va. A senior fellow at the Ethics and Public Policy Center, he is the author of “The Death of Politics: How to Heal Our Frayed Republic After Trump.”