Why ‘Evangelical’ Is Becoming Another Word for ‘Republican’

Why ‘Evangelical’ Is Becoming Another Word for ‘Republican’ 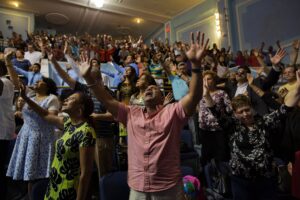 Ryan Burge. Oct 26, 2021. Why ‘Evangelical’ Is Becoming Another Word for ‘Republican’. The New York Times. Retrieved from https://www.nytimes.com.

The conventional wisdom about religion in the United States is that the number of people who have no religious affiliation is rising rapidly. In the 1970s, secular Americans (often called the Nones) made up just 5 percent of the population; now, that number has climbed to at least 30 percent. The data suggest that religious groups must be suffering tremendous losses as the Nones continue to increase in size and influence each year.

That’s why a recent report from the Pew Research Center came as a huge surprise. Its most shocking revelation was that, between 2016 and 2020, there was no significant decline in the share of white Americans who identify as evangelical Christians. Instead, the report found the opposite: During Donald Trump’s presidency, the number of white Americans who started identifying as evangelical actually grew.

Conservative Christians celebrated the news. For years, stories have appeared in media outlets about how many of the more theologically moderate denominations like Episcopalians and the United Church of Christ have suffered staggering losses in membership. The fact that denominations that allowed women pastors were declining while evangelical churches that took more conservative positions on views of gender and sexuality were holding their own was evidence for evangelicals that conservative religion has staying power. Because these moderate traditions were so much like the culture around them, the story went, it was easy for their members to fall away from church attendance. Evangelicals prided themselves on their distinctiveness from mainstream society, which insulated them from forces like secularization.

But they might hold off on patting themselves on the back too much. The number of self-identified evangelicals has most likely not increased over the last few years because evangelicals have been effective at spreading the Gospel and bringing new converts to the church.

This is happening in two different ways. The first is that many Americans who have begun to embrace the evangelical identity are people who hardly ever attend religious services. For instance, in 2008, just 16 percent of all self-identified evangelicals reported their church attendance as never or seldom. But in 2020, that number jumped to 27 percent. In 2008, about a third of evangelicals who never attended church said they were politically conservative. By 2019, that had risen to about 50 percent. 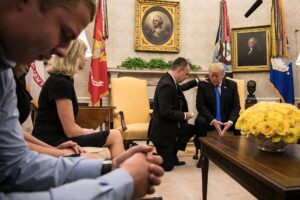 The data from the Pew Research Center reinforces that: Those who had warmer views of Mr. Trump were more likely to become evangelical between 2016 and 2020 than those who didn’t feel warmly toward him. The evidence points in one direction: For many Americans, to be a conservative Republican is to be an evangelical Christian, regardless of whether they ever attend a Sunday service.

The second factor bolstering evangelicalism on surveys is that more people are embracing the label who have no attachment to Protestant Christianity. For example, the share of Catholics who also identified as evangelicals (or born again) rose to 15 percent in 2018 from 9 percent in 2008. That same pattern appears with Muslims. In fact, there’s evidence that the share of Orthodox Christians, Hindus and members of the Church of Jesus Christ of Latter-day Saints who identify as evangelical is larger today than it was just a decade ago.

Yet these non-Protestants are embracing the evangelical label for slightly different reasons. Protestants and non-Protestants have a strong affinity for the Republican Party and the policies of Donald Trump, but non-Protestant evangelicals are much more religiously devout. For instance, half of Muslims who attend services at a mosque more than once a week and align with the G.O.P. self-identify as evangelical. (Just 20 percent of Republican Muslims attend mosque once a year.) In essence, many Americans are coming to the understanding that to be very religiously engaged and very politically conservative means that they are evangelical, even if they don’t believe in the divinity of Jesus Christ.

The rapid rise of the nonreligious and non-Protestant evangelical has meant that the tradition did not fade in any significant way over the last decade. But instead, what it means to be evangelical is being radically remade. It used to be that when many people thought about evangelicalism, they conjured up an image of a fiery preacher imploring them to accept Jesus. Now the data indicate that more and more Americans are conflating evangelicalism with Republicanism — and melding two forces to create a movement that is not entirely about politics or religion but power.

White evangelicalism has never been more politically unified than it is right now. In the 1970s, only 40 percent of white weekly churchgoing evangelicals identified as Republicans; in the most recent data, that number has risen to an all-time high of 70 percent.

The evangelical coalition of 2020 may not be in agreement about which religion is the correct one or even if religious devotion is necessary to identify as an evangelical. But on Election Day, they speak with one voice — in full-throated support of the Republican candidate.

Ryan Burge, an assistant professor of political science at Eastern Illinois University and a Baptist pastor, has written extensively about the interaction of religion and politics.

He (@ryanburge) teaches political science at Eastern Illinois University and is the author of “The Nones: Where They Came From, Who They Are and Where They Are Going” and the forthcoming “20 Myths About Religion and Politics in America.”