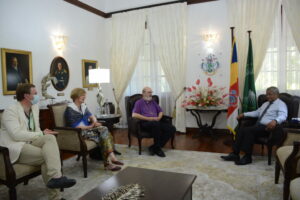 On a recent trip to the Seychelles, World Evangelical Alliance (WEA) Secretary General Bishop Dr. Thomas Schirrmacher met with the island nation’s President speaking about the country’s positive track record on fighting corruption, ensuring freedom of religion and belief and its efforts to protect the environment. He also held meetings with the leadership of the Seychelles Evangelical Alliance discussing the situation around Covid-19, the churches’ involvement in creation care and the Alliance’s leadership in the interreligious council, among others.

Meeting with President Wavel Ramkalawan at the State House in the capital Victoria, Schirrmacher congratulated him for the country’s successful fight against corruption. The Seychelles has emerged as the least corrupt country in Africa in the latest Corruption Perception Index report released by Transparency International in January 2020.1 “I would like to thank you that freedom of religion and belief has been growing and that there have been visible steps forward even in your short term since your election one year ago,” Schirrmacher said to the President. 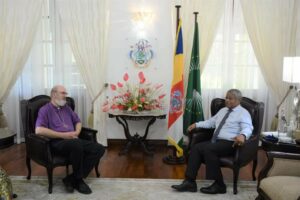 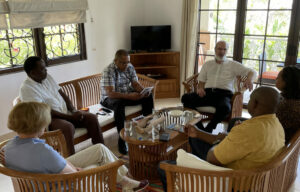 Schirrmacher also had two meetings with the General Secretary of the Seychelles Evangelical Alliance (SEA), Pastor Robert Moumou, and an official meeting with the board and leaders of the SEA, including the heads of the Pentecostal and the Baptist churches. The SEA represents about 10% of the nation’s estimated population of 92,462, while about 76% are Roman Catholic, 2.4% Hindu, 1.6% Muslim and another 1.1% belong to other faith groups.

He heard about the situation how Covid 19 has affected the country, about SEA’s involvement in creation care as well as their lead in the “Interreligious Council of the Seychelles”, which represents all religious bodies to the government to ensure equal legal treatment for all. Schirrmacher was also impressed to hear about the national prayer network involving all local churches each week.

Further topics included the growing involvement of the Anglican Church with the national Evangelical Alliances in the Seychelles and the neighboring countries like Mauritius and Madagascar, and the growing concern about the felt “colonialism” by large African denominations whose influence overshadows the autochthon indigenous evangelical churches and denominations in the Seychelles.