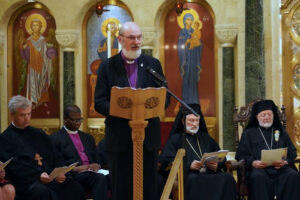 The International Day of Prayer for the Persecuted Church (IDOP) earlier this month served as a reminder that an estimated 300 million Christians are living in countries where they are facing varying degrees of discrimination or persecution. In most cases, it does not matter, which tradition a Christian belongs to – whether evangelical, Pentecostal, mainline Protestant, Roman Catholic, Orthodox, Oriental or others – they suffer simply for confessing their faith in Jesus Christ.

For 175 years, standing in solidarity with Christians who are facing discrimination and persecution has been at the heart of the mission of the World Evangelical Alliance (WEA). In continuation of this tradition, WEA Secretary General Bishop Dr. Thomas Schirrmacher joined Orthodox and other church leaders lamenting the reconversion of the Hagia Sophia Cathedral in Istanbul into a mosque, when he visited Washington, DC earlier this year.

“I thought the times were over, when after conquering the others, Christian colonial powers would convert mosques into churches and Muslim powers would turn churches into mosques. This is falling back into a mindset of Crusade times and in the case of the most prestigious church of Eastern Christianity, it harms Christian-Muslim relations around the globe,” Schirrmacher said. 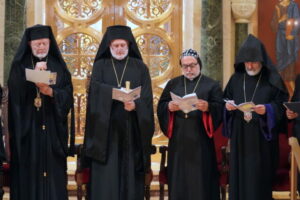 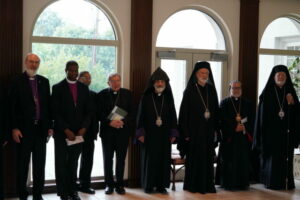 The prayer service took place one day after Schirrmacher was presented with a Festschrift titled “God Needs No Defense – Reimagining Muslim-Christian Relations”, which included a protest by Muslim leaders against the Turkish President’s decision last year to again convert the Hagia Sophia into a mosque. Built in 537 AD, the landmark Cathedral served as the center of Eastern Christianity for centuries and retains great symbolic and spiritual significance for Eastern Orthodox Christians. After the conquest by the Ottoman Empire in the 15th century, it was converted into a mosque but later turned into a museum in 1935, until it was again turned into a mosque in 2020.

The service, co-organized by the Greek Orthodox Archdiocese of America and In Defense of Christians, was held symbolically on the one-year anniversary of the reconversion at the Saint Sophia Greek Orthodox Cathedral in Washington that was named after the Hagia Sophia in Istanbul. It was attended by a variety of Christian leaders from the US and around the world.

While evangelicals and Eastern Orthodox churches have differences in theology and tradition, there has been increasing dialogue and collaboration on issues of mutual concern. In his recent address to the UN’s COP26 Climate Conference, Schirrmacher highlighted the critical role that Eastern Orthodox Patriarch Bartholomew I. of Constantinople played already thirty years ago in beginning to mobilize Christians from all backgrounds to address climate change and caring for the environment. He was a pioneer in emphasizing that it is not only a political or scientific issue, instead it is above all an issue of faith. His efforts opened many doors for evangelical and other Christians to become involved in creation care.

And in 2018, churches from all different traditions in Turkey together published a book titled “Christianity: Fundamental Teachings” that introduces the essentials of Christian faith to non-Christians. At the book launch, Schirrmacher commended their efforts as exemplary and said: “All the churches together have presented 100 pages, about our God, our Saviour, our faith, the Church and Christian morals, on which we all agree.”

He went on to emphasize that “this is not to downplay theological differences. There is a need for serious theological debate. For Christians, unity follows from the truth, not from cheap compromises. Speaking for Protestants, meaningful unity includes studying more thoroughly the rich inheritance of the older and historic churches. I am glad that in the last decades, Protestants and Evangelicals have started to study the church fathers in depth and to publish their works, with the 29 thick volumes of the Ancient Christian Commentary on Scripture being the most visible example. As the World Evangelical Alliance, we are doing much in defense of our discriminated brothers and sisters of the Orthodox Church and the seven Oriental churches. Along the way, we are learning a lot from them.”

The co-organizer In Defense of Christians (IDC) is the leading US-advocacy organization for Christians and religious minorities in the Middle East and Africa.

About the Hagia Sophia Cathedral: 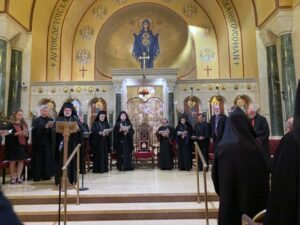 The Hagia Sophia (lit. Holy Wisdom) is a worship place designed by the Greek specialists in geometry Isidore of Miletus and Anthemius of Tralles. Built in 537 as the patriarchal cathedral of the imperial capital of Constantinople, it was the largest Christian church of the eastern Roman Empire (the Byzantine Empire) and the Eastern Orthodox Church. In 1453, after the Fall of Constantinople to the Ottoman Empire, it was converted into a mosque. In 1935, the secular Turkish Republic established it as a museum, so that it would be open to Muslims, Christians and others. In 2020, this decision was reversed and the Hagia Sophia re-opened as a mosque. This includes hiding major Christian paintings behind curtains. Thomas Schirrmacher has visited the Hagia Sophia frequently, often with delegations, and especially when having an audience with the Ecumenical Patriarch.

About the Holy Sophia Cathedral in Washington DC:

The foundation of Washington’s Greek Orthodox church was laid in 1956 by then-US-President Eisenhower. The temple is named Hagia Sophia after the magnificent site in Istanbul, historic Constantinople.

For additional photos and links to media reporting on the event, click here.