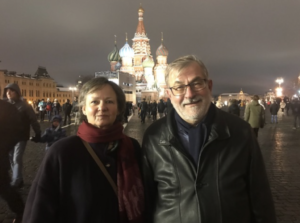 Cornelia and Johannes Reimer of WEA in the center of Moscow.

Cornelia and Johannes Reimer of WEA, together with Vitaly Vlassenko, General Secretary of the Russian Evangelical Alliance (REA), recently visited Tatarstan, West,- Central- and Eastern Sibiria as well as Moscow, the capital of the Russian Federation. The main purpose of the visit was to serve and teach in regional settings and study the Alliance dynamics in remote areas of this vast country. “The visit left a deep imprint on us,” says Cornelia, who visited the regions for the first time ever.

In Kazan, the capital city of Tatarstan, Christian leaders from 6 denominations met in the Missionary College, where young people from all Evangelical circles are educated for Evangelism and church planting among Muslims. The students come to Kazan from all Islamic countries of the former Soviet Union. Johannes Reimer was teaching on the impact of the Bible on the transformation of society. For many of the pastors gathered, this is one of the major issues in the future: how the church might properly relate to society and the state. Many of them reported about great opportunities to witness Christ even in classic Muslim areas. “Our churches lack knowledge, and literature is seldom available. We urgently need help from our larger Evangelical family,” pastors said. The report from Reimers of the work of the WEA was positively received, and hope expressed for closer cooperation between the Russian regions and Evangelicals in other parts of the world. 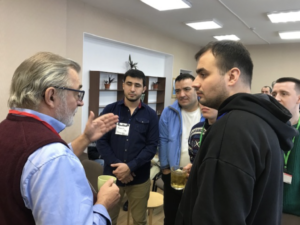 Young leaders of the church in Tatarstan in conversation with Johannes Reimer.

Similarly positive was the visit to Tjumen in West Sibiria, a Russian province as large as five times the size of France. Representatives from 10 Evangelical confessions were sent to the meeting. “For years we practice close cooperation in prayer, evangelism, social work, youth and children ministry and so on”, says Dr. Sergei Lavrinov, Pastor of the Pentecostal church “Light for the World.” Formerly a leading scientist in geology, he became Christian through the witness of Swedish Evangelicals who visited Tjumen, studied theology in an institute in St. Petersburg, returned to his Siberian hometown and planted the church, which today is by far the largest congregation in the region. “We have started additional churches in literally all the larger cities of our province, but also in the European part of Russia and the Crimea. And we assist other Evangelical denominations to evangelize and plant churches. The Alliance here in West Siberia is real and very active.” The brotherly atmosphere during the visit underlined the words of Lavrinow, who is the actual motor of this amazing movement of unity.

And our amazement grew further when we visited our next stations in Krasnoyarsk, Eastern Siberia and Novosibirsk, Central Siberia. Here too Evangelicals have created a pattern of close cooperation. In Krasnojarsk the regional cooperation even calls itself Evangelical Alliance of the Yenissei-Region. “Surrounded by Taiga and far from other places of civilization we understand the need for close brotherly cooperation,” says Bishop Vladimir Ashaev from the Association of Christians of the Evangelical Faith. And Genadij, one of leading pastors of the largest Baptist church in the city supports this view. He took us to an ancient church building on the hill overseeing the city of Krasnojarsk. “Here we gather with Christians from all Evangelical corners and pray regularly for the million inhabitants of our city. And in our joint prayer spiritual battles are won.” Genadij knows how difficult cooperation between Evangelicals can also be. “But in Krasnoyarsk we believe in the alliance”, he says. “It helps us at home and encourages our joint mission to Mongolia and China. Even the relationship with Russian Orthodox Church is good and marked by mutual respect.” This was clearly confirmed by Panteileimon, the Metropolitan of the ROC, whom we visited to discuss issues of cooperation in evangelism and apologetics. 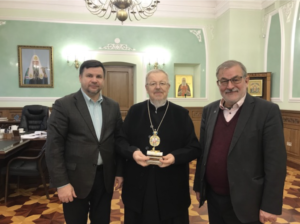 Vitaly Vlassenko, Metropolit Panteileimon and Johannes Reimer during their visit in the residence of the Metropolitan in Krasnoyarsk.

Not much different is the situation in Novosibirsk. Here too, many Evangelicals join hands in evangelism, church planting and prayer. “Churches support each other financially as well,” the pastor of the local Baptist church proudly reports. “The Western support has dried out. Now we need each other.” He shows us his newly build sanctuary. “Many gave us money, the Pentecostals, for instance. Without their help, we would not be able to finish our building. But thanks to God, we have started to cooperate.” And then he lists a whole number of similar joint projects. “Unity establishes our Evangelical identity; too sad some Western missions bring back divisions and quarrels.”

After 10 days we returned to Moscow and reported to the leadership of REA our joy from the tour. The Evangelical Alliance in Russia is alive and vitally active. Praise the Lord! “You will find this spirit of oneness in many corners of Russia,” says the leading bishop of the Russian Association of Christians of Evangelical Faith, Sergei Ryakhovski. “There is no reason to lament about the state of Evangelicalism in our country. The Lord still strongly moves among us”, says the bishop, who strongly supports REA and the World Evangelical Alliance.

Johannes Reimer is WEA Director of Public Engagement and head of the Peace & Reconciliation Network.