Roman Catholicism as a “temptation” for evangelical theology

Roman Catholicism as a “temptation” for evangelical theology

The evangelical faith, while feeling totally part of the history of the faithful church, is ultimately submitted to Scripture alone. 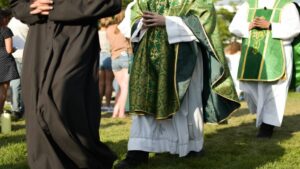 The Presidential Address at the Evangelical Theological Society is a helpful barometer to measure where the wind blows in North American evangelical theology.

This year (on November 16), President Al Mohler dedicated his address at the 73rd annual convention in Fort Worth, Texas, to the four temptations for contemporary evangelical theology.

What is interesting is to understand the main dangers surrounding it. Let me briefly comment on three temptations and then focus on Roman Catholicism.

Fundamentalism, atheism and Protestant liberalism
As far as Fundamentalism is concerned, Mohler acknowledged that evangelicals are in some sense fundamentalists because they “hold to fundamental Christian doctrines such as the inspiration and inerrancy of Scripture, the person and work of Christ, and the Trinity.”

Fundamentalism becomes a threat when it creates a tendency to withdraw from culture and to focus on “theological eccentricities” rather than the gospel.

As for Atheism, Mohler observed that “evangelicalism is not a mediating position between belief and unbelief.” Either God is or He isn’t.

Having said that, while evangelical theology may not flirt with a form of hard atheism, it may the tempted “to make room for some kind of middle ground on the question to court respect from secular universities.”

A third temptation is Protestant liberalism. According to Mohler, it “arises when Christians believe they must try to salvage the Christian faith to make it palpable to the culture.

Over the past few decades, Protestant liberalism has rejected virtually all the central doctrines of Christianity in attempt to make the faith more appealing to a secularized society.”

In our present-day context, the danger is to see evangelical theology sacrifice gospel integrity on the altar of the cultural idols of our generation.

The temptation of Roman Catholicism
Mohler’s analysis deserves to be discussed in evangelical theological circles. The issues raised are of crucial importance.

However, what is most interesting in his address is the reference to Roman Catholicism as one of the main temptations facing evangelical theology. It is an unexpected and welcome acknowledgement.

For centuries, Roman Catholicism was considered the theological antagonist of evangelical theology par excellence. In recent decades, however, this perception has gradually diminished and the lines have become blurred.

Today many evangelicals hold a very “sentimental” perception of ​​Roman Catholicism. Some mistake it for one of the many Christian denominations (perhaps a little “stranger” than others); others, frightened by the increasing challenges of secularization, see Rome as a bulwark for defending Christian “values;” still others, wanting to be legitimized at the ecumenical and interreligious table, overlook the theological differences in order to highlight what appears to unite all.

The fact that Mohler says that Roman Catholicism is a “temptation” (and therefore a danger to beware of) is a welcomed sign of spiritual vigilance.

It indicates that even in the USA – where the (at best) confused initiative “Evangelicals and Catholics Together” has been underway since 1994 and where the differences between Catholics and Evangelicals are increasingly seen as a question of nuance rather than substance – it is still possible to find evangelical voices calling for theological discernment.

Here are some of Mohler’s statements on Roman Catholicism:

Leonardo De Chirico is an evangelical pastor in Rome, Italy. He is a theologian and an expert in Roman Catholicism. He blogs at VaticanFiles.com.