One Chaste Marriage, Four Kids, and the Catholic Church

One Chaste Marriage, Four Kids, and the Catholic Church

A son reflects on his parents’ commitment, endorsed by the Catholic Church, to cohabit chastely like “brother and sister” to avoid mortal sin. 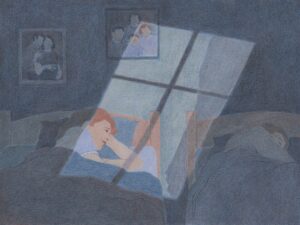 Mom had come to stay with me and my new wife, and we got trapped indoors during an ice storm. Sometime during the interminable weekend, my mother, probably in an alcohol-fueled moment of candor, spilled the beans.

I had never head of a Josephite marriage, a union inspired by the relationship between Joseph and the Virgin Mary, the mother of Jesus. And to this day, I am astonished that my parents undertook a similar path with the blessing of the Roman Catholic Church. While their arrangement did not comply with the strict definition of a Josephite relationship – for they entered marriage without the intention of a celibate union – such pacts remain an option for Catholics seeking a higher spiritual plane.

My father was a worldly 32 and my mother a winsome 19 when they met. He was a doctor completing his training at Queens General Hospital, now known as Queens Hospital Center. She was a student nurse in clinical training there. He was agnostic, though his parents were Presbyterian. She was Catholic. They eloped, were married by a Lutheran minister, and produced four children. Dad had a severe heart attack at 46. This brush with death prompted him to convert to Catholicism.

After he recovered from his heart attack, my father undertook religious training from our assistant pastor, the Dublin-born Rev. Patrick O’Brien, a rosy-cheeked, rotund fellow who could have come from central casting. I remember that every Wednesday night my mother would serve roast leg of lamb with mint jelly for the benefit of our ordained visitor. This was far from the typical weeknight fare in our Texas household.

Not long thereafter, my three siblings and I noticed that our parents’ double bed was replaced by twin beds. My younger sister inquired about this. The sharp tone of our mother’s answer precluded further discussion: “Your father needs his rest!”

My three siblings and I accepted this without question.

What we didn’t know was that y father had been married before meeting my mother. His first marriage lasted about two years, and because the church refused to recognize the divorce and end of that union, my parents could not received the sacrament of matrimony.

During my father’s immersion into Catholicism, it was pointed out that without the sacrament of matrimony performed by a priest, my parents were technically living in sin. Mortal sin. Every Catholic schoolchild knew the consequences: Mortal sin without absolution meant eternal damnation! And what of the legitimacy of the children?

My father tried repeatedly to have his first marriage annulled. The church declined. Grounds for Catholic annulment were much more strict before reforms introduced in the U.S. in 1968. To the best of my knowledge, my father’s first marriage did not meet the church’s requirements of that era.

But it did not offer a different solution. Mom and Dad, with the bishop’s permission, and after taking a solemn vow, could leave the marital bed and replace it with chaste cohabitation.

(Left) William and Elizabeth Leavenworth in 1947

According to an official document that still bears the embossed seals and signatures of various church officials and Catholic entities, they could “continue to cohabit in the manner of brother and sister.” I have the letter, dated March 5, 1962, from a diocesan marriage tribunal, a “curia matrimonialis,” in which both my parents swear to adhere to this arrangement – or face losing access to the sacraments and the blessing of the church. Mom was 34; Dad was 47.

Dad and I, as well as my younger sister, were later confirmed by the bishop on the same night at Shrine of the True Cross Church in Dickinson, Texas.

Secrecy was paramount. “No one is to know of the brother-sister relationship except the Advocate Father O’Brien, the Pastor, the Tribunal, and the confessors of the parties,” the tribunal’s letter said. It mentioned avoiding “notoriety” and “scandal.” Of course, even in the 1960s, one would think that not having sex with your spouse would fall on the low end of the scandal spectrum.

All this may seem like an artifact of the past, but a 2010 article in the publication Catholic Exchange explained that in addition to conventional marriage, there still exists “the type of marriage Joseph and Mary had and is sometimes referred to as a Josephite marriage.” Married celibates, according to the article, give up sex “because they hope to live a life that points the way to what will come in the next life, to something better and higher.”

Robert Sullivan, a regular writer for the Catholic Exchange and a lawyer from Nebraska, told me that Josephite-like arrangements can be used to circumvent “some kind of impediment to marriage” as well as to “deepen a person’s faith.”

I couldn’t help but wonder if the Catholic Church continues to structure these arrangements for couples who request such a union.

“It is extremely rare that people today request a Josephite marriage,” said Christopher West, the president of the Theology of the Body Institute, which promotes a healthy understanding of sex within the teachings of the Catholic Church. “I do know of a couple who a few years ago discerned that they were called to live a Josephite marriage. Their motivation was carefully evaluated by their local diocese.”

The prevailing view of theologians is that the special physical relationship of Mary and Joseph – the original Josephite marriage – endured throughout their lives.

As for my parents, nine years after my father’s heart attack and their decision to have a celibate marriage, his first wife died. On an ordinary Tuesday evening in 1970, Mom and Dad were married in secrecy at our parish church. Two tight-lipped family friends served as witnesses. My mother said, “As I recall, we went out for a drink afterward.”

The twin bed in my parents’ bedroom were replaced by one big one Yet again, my younger sister asked about the rearrangement.

My mother’s brusque reply: “Your father is feeling much better!”

Yes, I suppose he was feeling better, reunited with Mom and, at long last, their union recognized for what it was.

I told this story when I delivered the eulogy at my mother’s funeral mass at Shrine of the True Cross in May 2019. I’m sure it ws news to most of her many friends in the church that day. The current pastor didn’t know about her complicated marital history, and I was a little nervous about how he’s respond.

But after I sat down, he took the pulpit. “I can’t explain or excuse the things the church asked of people more than 50 years ago,” the priest said. “But it’s clear how important it was to Betty and Bill that their marriage be blessed by the church. Without judging what they went through, we can admire and appreciate their resolve and their sacrifice to enter the sanctity of marriage.”

There is still a lot I don’t understand about a celibate union, but what harm did it do? Our brood of four siblings might have been increased by a few more souls. But my parents didn’t seem to feel shortchanged, so who am I to question things. During her long years as a widow, Mom recalled, “It was what we had to do to be together. It wasn’t so bad.”

Geoffrey Leavenworth is a writer based in Austin, Texas. He is the author of four books, including the novel, “Isle of Misfortune,” and the architecture volume, “Historic Galveston.”