It’s Easy to Put ‘Jesus’ on Your Bus. Practicing Faith Is Harder.

It’s Easy to Put ‘Jesus’ on Your Bus. Practicing Faith Is Harder. 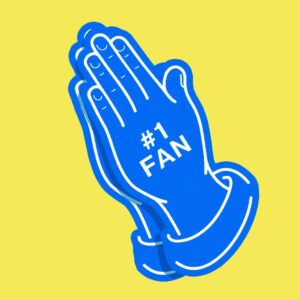 On Thursday, I saw tweets featuring the debut of a campaign bus for Kandiss Taylor, a Republican candidate for governor of Georgia. It is emblazoned with what is evidently her platform: “Jesus, Guns, Babies.” That’s it. No further explanation needed, or perhaps more accurately, no further explanation given.

A lot of people mocked the bus online, seeing as “Jesus, Guns, Babies” doesn’t exactly make, you know, sense on its own (a friend joked that it sounded like Jesus was heaving babies out of a cannon).

Polling at 3 percent, Taylor’s not a major factor in the race, but I am fascinated by what she represents. She is an example of how a lot of the biggest things that spark polarization in this country are performative. It reminds me of being at a big game. We wave our giant foam hands and chant the cheers without really having any idea what we’re saying or why we’re saying it.

This is what our politics has become: We’re often just fans of a party — or even a religion — not believers in actual tenets.

As someone who has covered politics, I can appreciate the brutal simplicity of Taylor’s messaging. But as a Christian, I’m … depressed by it. I believe that Jesus Christ is the Son of God, the savior of all, who was born to the Virgin Mary and suffered and died on the cross at Calvary for the sake of the sins of humanity. I believe he then rose from the grave, and as the Nicene Creed, an ancient statement of faith, puts it, he will come again in glory to judge the living and the dead.

I believe that as much as I believe that the sun will rise in the east and set in the west. I read the Bible regularly (from Genesis to Revelation to the Acts of the Apostles, my favorite book of the Bible) and I think a lot about my faith and its role in my life. Suffice it to say, faith is hard — faith in the unseen, faith in something that encourages you to act against your first instinct, faith that, no matter what you want to do, tells you what you should do instead.

It is not hard to be a Christian in America since the majority of Americans identify as Christian and virtually every public institution bends over backward for us. But it is hard to live a Christian life — to exist as a person who has a belief in an eternal savior but spends a lot of time wondering what that really means.

Putting the word “Jesus” on a campaign bus is not hard. And it is not an exercise in faith. No one can learn anything about Jesus Christ from that campaign bus.

Some will see the word and pump their fist in agreement with what they perceive it to mean — the equivalent of putting a “Go Blue” sticker on your bumper or waving a Red Sox flag at a baseball game. Others will shake their heads, and both sides wind up pushed further apart for no reason whatsoever except that performative religiosity is polarizing. Either you’re in the club, or you’re not. In the Republican primary in Georgia, religious faith — the faith I share, or at least, I might share — evidently isn’t meant to be followed or abided by or lived or rejected or challenged. Instead, it’s a cudgel, waved at passers-by.

Sloganeering is not new to politics, of course. Woodrow Wilson ran for re-election in 1916 with the line, “He kept us out of war.” And while the claim eventually turned false, it was at least a clear argument. More recent presidential campaigns have relied on slogans that seem more illusory, the ideas compressed and minimized into phrases that act more as talismans than as promises — Jesse Jackson’s “Keep hope alive” or Barack Obama’s “Yes we can.”

Performative religiosity is just as old hat. Few people were more adept at understanding the power of displaying belief for political reasons than Donald Trump. In 2016, Trump said, “Nobody reads the Bible more than me,” and he accused Secretary of State John Kerry of having never read it. It was like the time he told the MSNBC host Chris Matthews that women who have abortions should receive “some form of punishment,” a viewpoint that even anti-abortion groups resisted.

The Bible is the story of people being people — at their best, worst and most mindbendingly irritating (see: Aaron and the golden calf.) Saying “nobody reads the Bible more than me” doesn’t tell me if you’ve grappled with the Psalms or contemplated your own sins or spent a dark night of the soul wondering what God thinks of you.

Did any of us think it was possible that Trump had wrestled with such questions? No matter. It’s enough to flash a cultural symbol for being “the right kind of Christian.” And you certainly don’t need to prove your knowledge of Scripture or your adherence to the actual faith painstakingly described in it. It’s a posture we all recognize and understand, but it’s ultimately meaningless outside of weak political hand waving.

But somehow, Taylor and her bus seem like a new nadir. A campaign based entirely on “Jesus, Guns, Babies” sounds like a parody, like what a TV writer would think a Georgia Republican voter wants — a little too on the nose.

With that list, she’s not even pretending to have read Scripture or to have engaged with Christianity in any way. She’s got three words, and that’s all she thinks she owes voters. She’s on Team Jesus. She’s even got the bus ready. In a way, it’s so honest about how dumb our political process has become — how crass and empty — that I almost admire it.

I’m reminded of Matthew 6:5-6, in which Jesus explains to his disciples how to pray, telling them that there is no need to do so publicly, showing off their religious devotion for the purpose of garnering attention (or polarizing the people around them). Christ tells them: “And when you pray, do not be like the hypocrites. For they love to pray standing in the synagogues and on the street corners to be seen by men. Truly I tell you, they already have their full reward. But when you pray, go into your inner room, shut your door, and pray to your Father, who is unseen. And your Father, who sees what is done in secret, will reward you.” And, I would guess (but never assume), that these instructions include “Don’t put Jesus’ name on a campaign bus.”

Jane Coaston is the host of Opinion’s podcast “The Argument.” Previously, she reported on conservative politics, the G.O.P. and the rise of the right. She also co-hosted the podcast “The Weeds.” @janecoaston