Is the West Becoming Pagan Again?

Is the West Becoming Pagan Again? 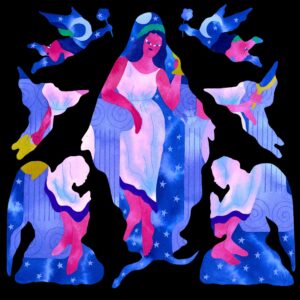 This year, at the height of what used to be called the Christmas season, a Pew Research Center poll on religion revealed that only slightly more Americans described themselves as Roman Catholics (21 percent) than as believers in “nothing in particular” (20 percent). The millennial generation, which includes most adult Americans under 40, is the first one in which Christians are a minority.

Many Americans have a sense that their country is less religious than it used to be. But is it really? The interplay among institutions, behaviors and beliefs is notoriously hard to chart. Even if we could determine that religious sentiment was in flux, it would be hard to say whether we were talking about this year’s fad or this century’s trend.

Or perhaps we are dealing with an even deeper process. That is the argument of a much-discussed book published in Paris this fall. In it, the French political theorist Chantal Delsol contends that we are living through the end of Christian civilization – a civilization that began (roughly) with the Roman rout of pagan holdouts in the late fourth century and ended (roughly) with Pope John XXIII’s embrace of religious pluralism and the West’s legalization of abortion.

The book is called “La Fin de la Chrétienté,” which might be translated as “The End of the Christian World.” Ms. Delsol is quite clear that what is ending is not the Christian faith, with its rites and dogmas, but only Christian culture – the way Christian societies are governed and the art, philosophy and lore that have arisen under Christianity’s influence.

That is still quite a lot. In the West, Christian society is the source of our cultural norms and moral proscriptions, not to mention the territory of our present-day culture wars, with their strident arguments over pronouns and statues and gay bridegrooms and pedophile priests.

For the most part, Ms. Delsol rues what is being lost as Christian civilization ends. Yet her arguments, though they are strong and pointed, are almost secondary to the tone of the book, which is a model for polite engagement with hotly contested subjects. A beneficiary of the trends she deplores — say, an atheist, a feminist, a transgender person, a Muslim immigrant — will likely recognize the world she describes as the world he lives in.

Ms. Delsol’s ingenious approach is to examine the civilizational change underway in light of that last one 1,600 years ago. Christians brought what she calls a “normative inversion” to pagan Rome. That is, they prized much that the Romans held in contempt and condemned much that the Romans prized, particularly in matters related to sex and family. Today the Christian overlay on Western cultural life is being removed, revealing a lot of pagan urges that it covered up.

To state Ms. Delsol’s argument crudely, what is happening today is an undoing, but it is also a redoing. We are inverting the normative inversion. We are repaganizing.

Paganism never had a precise definition. The word was a catchall for those who rejected the Christian revelation, whether polytheists, nature-worshipers or agnostics. The pagus was the countryside. The Latin word “paganus,” like the English word “heathen,” carried with it a contempt for the hick and the hillbilly.

Of course, the pagan culture of Rome was no small achievement. It had its artists and intellectuals, along with its robust natural religions, and could not simply be scolded and shamed out of existence. Paganism has always exerted a subterranean tug on the thinking of the Christian West. The Renaissance, with its rediscovery of Epicurus and Lucretius, is a familiar example.

Pagans thought that the collapse of their beliefs would mean the collapse of Rome. Many 21st-century conservatives believe something similar about the erosion of CHrsitian values: that the liberties of our open society are parasitical on our Christian inheritance and that when that inheritance collapses, civilization will, too.

Ms. Delsol does not see things quite that way. The ethics of the Christian age, she notes, were shot through with unacknowledged borrowings from the pagan values Christianity replaced. (Consider stoicism or the Hippocratic oath in medicine.) In the same way, today’s post-Christian progressivism comes with a large helping of Christianity. Why use Christian matrimony to unite gay couples, for example, rather than a new institution less wrapped up in Christian values? Because that is just the piecemeal way that civilization change happens.

So if another civilization comes to replace Christianity, it will not be a mere negation, such as atheism or nihilism. It will be a rival civilization with its own logic – or at least its own style of moralizing. It may resemble the present-day iconoclasm that French commentators refer to as le woke. (The term means basically what it does in English, except that French people see wokeness as a system imported wholesale from American universities and thus itself almost a religious doctrine.)

Christianity the religion has teachings about loving one’s neighbor and turning the other cheek that are impressively clear. For Christianity the culture, though, these can be sources of ambivalence. Christianity has produced some hardened moralizers, to put it mildly. But there has always been a tension between its teachings and its quest for political power.

Ms. Delsol worries that le woke has no such hesitation. Speech codes, elementary school consciousness-raising, corporate public service advertising – in some ways our public order is coming to resemble that of pagan Rome, where religion and morality were separated. Religion was a matter for the household. Morality was determined and imposed by society’s elites, with grim results for freedom of thought.

Whether or not a society is tolerant of rival ideas has less to do with its leaders’ idle ideological positioning and much more to do with their position in a historical cycle. When in A.D. 384 Christians succeeded in removing the pagan Altar of Victory from the Roman Senate, where it had stood for almost four centuries, the pagan statesman Symmachus understood that Rome’s tolerance would henceforth be denied to those who had built it. If we know Symmachus for one sentiment today, it is his condemnation of Christianity’s dogmatic claims to truth as an affront against common sense. “There cannot be only one path toward such a great mystery,” he said.

People find such sentiments inspiring. Regimes usually don’t. A decade later, the Christian emperor Theodosius was banning the Olympics on the grounds that there was too much nudity in them – without any objections from common sense. The conventional wisdom had come around to dogmatism. It still too often does.

Christopher Caldwell is a contributing Opinion writer for The New York Times and a contributing editor at The Claremont Review of Books. He is the author of “Reflections on the Revolution in Europe: Immigration, Islam and the West” and “The Age of Entitlement: America Since the Sixties.”