In France, ‘laïcité’ and Christmas dodge each other

In France, ‘laïcité’ and Christmas dodge each other 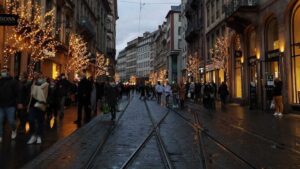 The ‘anti-separatism’ law strengthens the secularist narrative ahead of the 2022 elections. Meanwhile, a depersonalized Christmas continues to be celebrated on the streets.

Jonatan Soriano. December 21, 2021. In France, ‘laïcité’ and Christmas dodge each other. Evangelical Focus. Retrieved from: https://evangelicalfocus.com/.

It is strange to observe the way in which tradition and the modern concept of the state coexist in France.

Neither the cold nor laïcité, the concept of secularism that arose in the 1789 revolution and is a major element of the character of today’s republic, can prevent the French and thousands of tourists from all over the world from taking to the streets of the cities to celebrate Christmas.

This can be seen in Strasbourg, a city which, because of its German influence and Alsatian character, claims to be the capital of Christmas. Thousands of light bulbs and decorations of all kinds line the streets, reminding believers, atheists, agnostics and others of a tradition which, although depersonalized, is based on a religious celebration. 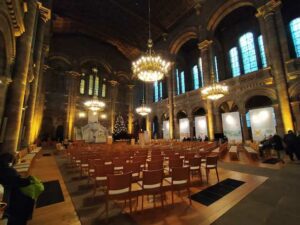 But the monumental importance of Strasbourg in the religious history of the West is also particularly significant. Only in Strasbourg, for example, can you escape the Christmas lights and pedestrian traffic by entering the Temple Neuf.

In the impressive Protestant church that John Calvin pastored between 1538 and 1541, before being reclaimed back to Geneva, the use of the French Psalter was introduced for the first time in a worship service.

And as we leave, the passing of time and reality get confused when, unexpectedly, a group of army soldiers pass by, carrying their machine guns in their arms and looking at the stalls of food and Christmas decorations.

At this sight, one inevitably wonders what has happened in France.

A sense of threat

This September began the trial of 20 people for the Paris attacks of November 2015, in which 130 people were killed in several explosions and shootings, among others at the Bataclan concert venue.

Just a few months earlier the attack on the satirical magazine Charlie Hebdo for its cartoons about Mohammed had occurred.

Such events have shaped the French government’s behaviour in recent years regarding national security, announcing, among other measures, the patrolling of city streets by military groups.

Far from improving, the situation has worsened in recent years. Not only because France spends more on defence today than it did ten years ago, exceeding 2% of its GDP, or more than 47.745 billion Euros, according to the Stockholm International Peace Research Institute (SIPRI).

But also because of the months-long debate and the approval, this February, of the controversial anti-separatism law, focused on the fight against radical Islamism, but that has generated criticism from several religious minorities, including evangelical Christians, for undermining the religious freedom guarantees.

This law was one of the key projects of the Macron government, and his cabinet has shown this in its defence of the draft law.

To understand how the Macron government linked its draft law to a renewal of the old concept of laïcité, we only have to recall the words of the French Interior Minister, Gérald Darmanin, in a debate in the National Assembly, where he pointed out that “the law of the Republic is superior to the law of God” .

The words hardened during the process of discussion of the law. And even more so with events such as the murder of secondary school teacher Samuel Paty in October 2020 by an 18-year-old boy because the teacher had shown a cartoon of Mohammed in a high school class.

“He wanted to destroy the Republic and its values”, stated President Macron speaking about the author of the murder. “This is our battle. And it is existential”, he said afterwards, pointing to the magnitude of the idea the French government has in mind.

The election campaign for the April 2022 elections is already taking the pulse of French politics. Television screens are broadcasting debates and talk shows, and intellectual analysts are talking about never-ending ‘latest news’.

The demand for laicité has been part of the electoral debate for months, bringing back ideas that are common in France, such as the idea that individual faith belongs to the private sphere of a person’s life.

This was emphasised by the Minister of Education, Jean-Michel Blanquer, before the Senate, speaking about home schooling and what he considers to be “parallel spaces”. For him and many others, these spaces are “the negation of the common space”, in which individual talents should be exposed and recognized, and which “is the Republic”. 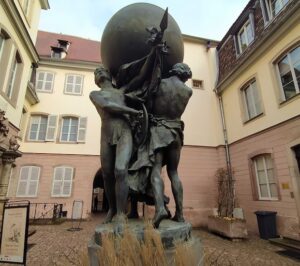 Walking around Colmar, another Alsatian town that also claims to be the capital of Christmas, you come across a sculpture inside the museum of Auguste Bertholdi, amidst a myriad of lights and ornaments, in which three figures hold a globe and the following inscription reads: “The world is sustained by freedom, patriotism and work.

Then, back in the street, the light bulbs start to glow again and Christmas carols and pop classics continue to be played over the loudspeakers.

In this context, it seems as if this new understanding of laïcité is helping people forget the spiritual meaning contained in the tradition of the Christmas celebration. At the same time, a completely depersonalized Christmas turned into a popular attraction goes ahead, avoiding the political debate.