I Followed the Lives of 3,290 Teenagers. This Is What I Learned About Religion and Education.

I Followed the Lives of 3,290 Teenagers. 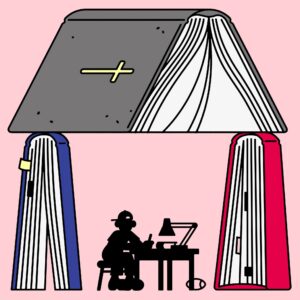 This is what I learned about religion and education.

Llana M. Horwitz. March 15, 2022. I Followed the Lives of 3,290 Teenagers. This Is What I Learned About Religion and Education. The New York Times. Retrieved from: https://www.nytimes.com/.

American men are dropping out of college in alarming numbers. A slew of articles over the past year depict a generation of men who feel lost, detached and lacking in male role models. This sense of despair is especially acute among working-class men, fewer than one in five of whom completes college.

Yet one group is defying the odds: boys from working-class families who grow up religious.

As a sociologist of education and religion, I followed the lives of 3,290 teenagers from 2003 to 2012 using survey and interview data from the National Study of Youth and Religion, and then linking those data to the National Student Clearinghouse in 2016. I studied the relationship between teenagers’ religious upbringing and its influence on their education: their school grades, which colleges they attend and how much higher education they complete. My research focused on Christian denominations because they are the most prevalent in the United States.

I found that what religion offers teenagers varies by social class. Those raised by professional-class parents, for example, do not experience much in the way of an educational advantage from being religious. In some ways, religion even constrains teenagers’ educational opportunities (especially girls’) by shaping their academic ambitions after graduation; they are less likely to consider a selective college as they prioritize life goals such as parenthood, altruism and service to God rather than a prestigious career.

However, teenage boys from working-class families, regardless of race, who were regularly involved in their church and strongly believed in God were twice as likely to earn bachelor’s degrees as moderately religious or nonreligious boys.

Religious boys are not any smarter, so why are they doing better in school? The answer lies in how religious belief and religious involvement can buffer working-class Americans — males in particular — from despair.

Many in the American intelligentsia — the elite-university-educated population who constitute the professional and managerial class — do not hold the institution of religion in high regard. When these elites criticize religion, they often do so on the grounds that faith (in their eyes) is irrational and not evidence-based.

But one can agree with the liberal critique of conservatism’s moral and political goals while still acknowledging that religion orders the lives of millions of Americans — and that it might offer social benefits.

A boy I’ll call John (all names have been changed to protect participants’ privacy under ethical research guidelines) was a typical example of the kind of working-class teenager I’ve been studying. He lived an hour outside Jackson, Miss. His father owned an auto-repair shop and his mother worked as a bookkeeper and substitute teacher. His days were filled with playing football, fishing and hunting with his grandparents, riding four-wheelers with friends and mowing the occasional lawn to earn pocket money.

John aspired to attend college, but given his parents’ occupations, income (the equivalent of $53,000 today) and education (both had earned vocational certificates), the odds were not in his favor.

In Jennifer Egan’s New Novel, Our Memories Are Available for All to See

How Australia Became an N.B.A. Point Guard Pipeline
Still, he reached a milestone that has become largely out of reach for young men like him: He earned his associate degree. And his faith and involvement in church played a large part in that.

Children with college-educated parents have many advantages that make their academic trajectories easier. They tend to live in neighborhoods with a strong social infrastructure, including safe outdoor spaces. They have more familial and geographic stability, which means they rarely need to transfer between schools, disrupting their educations and severing social ties.

Children from wealthier families also benefit from a network of connections and opportunities that many poorer children lack. College-educated parents tend to work in professional organizations and have robust social networks from college where they meet other members of the professional class. All these social ties — from the neighborhood, the workplace, and college — provide a web of support for upper-middle-class families, which sociologists refer to as “social capital.”

But working-class families like John’s do not have the same opportunities to develop social capital. The workplace used to be a central social institution for working-class families, but in the gig economy it is nearly impossible to feel a sense of stability, acquire health insurance or develop relationships with colleagues.

The lack of social capital — along with systemic problems and inequities — has contributed to the unraveling of the lives of millions of working-class Americans, especially men. Since the early 2000s, just as the kids in my study were entering adolescence, there has been a drastic rise in the number of working-class men dying “deaths of despair” from opioids, alcohol poisoning and suicide.

But despair doesn’t die: It gets transmitted to children. Most of the working-class kids in my study — especially boys — seemed to look out in the world and feel despair physically, cognitively and emotionally. I found that most of the working-class boys in the study had dropped out of the educational system by their mid-20s and seemed on track to repeat the cycle of despair.

But not John. He and dozens of other boys in the study had a support system that insulated them from the hopelessness so many of their peers described. Through his teenage years, John regularly attended his local evangelical church and was active in its youth group. There were organized social activities like rafting and weekly gatherings at the minister’s house to talk about what was going on in their lives.

Being involved with his church reinforced biblical teachings, leading John to think of Christ as the person he most wanted to emulate (most teenagers answer by referring to an actor, an athlete or a family member). By observing how his parents and others in his religious community behaved, John learned to see God as someone he “can talk to and tell personal things to.”

The academic advantage of religious working-class children begins in middle and high school with the grades they earn. Among those raised in the working class, 21 percent of religious teenagers brought home report cards filled with A’s, compared with 9 percent of their less-religious peers. Grades are also the strongest predictor of getting into and completing college, and religious boys are more than twice as likely to earn grades that help them be competitive for college admissions and scholarships.

Religious girls from working-class families also see educational benefits compared with less religious girls, but there are other factors that help them be academically successful outside of religion. Girls are socialized to be conscientious and compliant, have an easier time developing social ties with family members and peers, and are less prone to get caught up in risky behaviors.

Why does religion give boys like John an academic advantage? Because it offers them the social capital that affluent teenagers can get elsewhere. Religious communities keep families rooted to a place and help kids develop trusting relationships with youth ministers and friends’ parents who share a common outlook on life. Collectively, these adults encourage teenagers to follow the rules and avoid antisocial behaviors.

Although John cited peer pressure as the most stressful problem facing teenagers, he avoided falling into a pattern of drug and alcohol abuse that often derails kids from academic success. The research for my book focused on Christians, but I’ve found that religious communities are a source of social capital for Jewish people as well.

Theological belief on its own is not enough to influence how children behave. Adolescents must believe and belong to be buffered against emotional, cognitive or behavioral despair. I found that religion offers something that other extracurricular activities such as sports can’t: It prompts kids to behave in extremely conscientious and cooperative ways because they believe that God is both encouraging and evaluating them.

As John put it at the beginning of my study, when he was 16, religion “helps me in my problems or when I’m down.” When he was unsure of how to handle a situation, he looked to his minister and scripture for answers. John said he suspected that if he weren’t part of his weekly church youth group, he would have been “doing a lot of things wrong.”

Religion doesn’t just help boys from working-class families during their teenage years — it also deters them from falling into despair in adulthood. We can see this in the way John’s life unfolded. In his early 20s, John stopped reading the Bible and no longer participated in his church community. Other parts of his life also started to fall apart. He dropped out of college and got arrested for marijuana possession.

That was a wake-up call, and John decided to return to church. Within a few years, he managed to get his life back on track. John is now living with his grandmother, whom he cares for, and his girlfriend, whom he plans to propose to. He believes that God has called him to serve others by working in the medical field. He returned to community college and earned an A.A. while working as an E.M.T. and plans to become a paramedic or a nurse. He attributes much of this to his faith.

In his final interview with researchers at age 26, John said, “The most important things in life to me is my family and my relationship to God.”

Ilana M. Horwitz is an assistant professor of Jewish studies and sociology at Tulane University and the author of “God, Grades, and Graduation.”