How Christmas Changed Everything 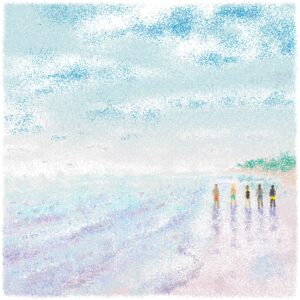 Christmas sermons are notoriously difficult to write. The shock of the story – the wild and earth-shattering claim that God became a baby – all too often fails to astonish, lost amid sentimentality, familiarity, distraction, reindeer and holiday marketing.

There are other stories from the ancient world of gods or godlike beings who copulate with mortals and birth a demigod hero. But Christians make the strange claim that the one true Creator became, not only a human and not only a baby, but one in poverty, with no great strength or power; a child born to a lower-class family, an ethnic minority, who lived under an oppressive and violent imperial power. He was marginalized and despised and died the shameful death of a criminal.

These claims are simply wonderous, but it often takes imaginative work to clear the debris of overfamiliarity and 2,000 years of history to rediscover that sense of wonder. But if you live in the West, the claims of Christmas have profoundly shaped your life and view of the world. You don’t have to believe in Jesus or even think about him for that to be true. The West is “so saturated in Christian assumptions that it is almost impossible to remove ourselves from them,” said Tome Holland, a British historian and author of “Dominion: How the Christian Revolution Remade the World.” He continued, “We tend to take for granted that the lowest of the lowest do have dignity.”

The story of Jesus represented, in the words of seventh-century theologian Maximus the Confessor, “a wholly new way of being human.” The church slowly discovered (and has had to rediscover time and time again) that God becoming a specific human being changes our understanding of humanity itself. Therefore, dignity is not reserved to only one nationality, gender, or class. Rather, the human body is a holy thing to be protected (no matter whose body it is), and the value of the weak is more important than the prerogatives of the powerful. “The power of victimhood,” says Mr. Holland, is “part of the revolutionary effect of Christianity.”

Because of this, early Christians became known for rescuing and raising infants who were “exposed,” that is left outside to die, a common practice in the ancient world. They were known for voluntarily remaining in cities amid plagues to care for the sick and the poor. The rapid growth of the early church was driven in part by slaves and women who were attracted to the Christian movement, a fact that was noticed and ridiculed by the wider Roman world.

These same radical ideas reverberate down through the centuries. They eventually motivated the invention of hospitals, mass education, and widespread literacy. They inspired those who opposed slavery and influenced the contemporary idea of universal human rights. Charles Malik, a Lebanese Christian who heled draft the Universal Declaration of Human Rights in 1948, said, “The ultimate ground of all our freedom is the Christian doctrine of the absolute inviolability of the human person.” In different ways over time, the belief in the dignity of even the weakest in society flowed from people meditating on this same shocking story that the church tells at Christmastime today.

But just as the story is so familiar that it no longer shocks us, neither do its world-altering implications.

Perhaps the best way for us to dust off this story is to see the incarnation through the eyes of those ancients for whom it would have been a revolutionary reversal of expectations. Can we hear it through the ears of those who had heard the phrase “Son of God” applied only to Augustus Caesar, a powerful king and military ruler, not to an oppressed and poor itinerant? Could we hear it with those who could have never imagined that God would identify himself not with the victors or the strong but instead with the hungry, the thirsty and the imprisoned? Could we hear it with those whose bodies have been beaten and broken, who would be amazed that God found it fit to become a human body that would be beaten and broken?

The development of the idea of universal dignity could be understood as a result of an invisible hand guiding societies toward “progress” or even as a series of random accidents. A.C. Grayling, a British philosopher, argues that seeds of this concept can be found in the thoughts of Socrates, Buddha and Confucius. Scholars like Steven Pinker and Jonathan Israel trace the origin of human rights to the Enlightenment era.

And of course, it’s obvious that Christians haven’t always lived up to this radical ethic, as enslavers and colonialists often explicitly reclaimed Aristotle’s views of “natural slaves” to justify their violence against other human beings. But Christians since at least the second century have seen the furthering of universal human dignity as the unfolding triumph of Christ and his kingdom, quietly set into motion by God being born one night in Bethlehem.

This is the season where we recall the scandalous news that the maker of heaven and earth, in the words of Paul’s letter to the Philippians, “emptied himself, taking the form of a servant, being made in the likeness of men” and became obedient even to death on the cross. This story continues to offer us an invitation today.

Even now, I catch myself believing that the world belongs to the victors and the powerful. The church, like nearly everyone else, tends to want to be more like the comfortable, the successful, and the powerful – more like Augusts Caesar – than the one who became weak, helpless and despised. We often look for God more in the abundance of gifts under the tree or the happiness of our days than in the helplessness of a baby, the worry lines of the poor, or the lonely agony of a dying man on a cross. But again this year, this story asks to shock us anew and to yet again turn the world upside down.

Tish Harrison Warren is a priest in the Anglican Church in North America and author of “Prayer in the Night: For Those Who Work or Watch or Weep.”