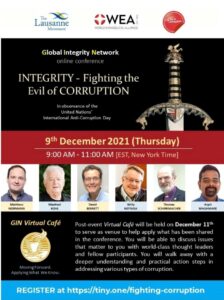 On the United Nations’ International Anti-Corruption Day on Thursday December 9th, the Global Network on Integrity and Anti-Corruption (GIN) will hold an online conference titled “Integrity – Fighting the Evil of Corruption.” Highlighting the role of the Church in fighting corruption, speakers include World Evangelical Alliance (WEA) Secretary General Bishop Dr Thomas Schirrmacher and Crime Prevention and Criminal Justice Officer at the UN Office on Drugs and Crime (UNODC) Livia Krings, among others.

The conference is the third in a series of online events organized by the GIN, a joint initiative of the WEA and the Lausanne Movement that together educate and mobilize their members to address the issue of corruption in society. Based on the Biblical perspective on integrity and reflecting God’s call for His people to live righteously, speakers will explore practical responses beginning at the personal level, then within the church and up to a global strategy to respond to corruption, which the UN describes as “a complex social, political and economic phenomenon that affects all countries.”

In his 2019 co-edited book on the topic, Schirrmacher observes that “in the Old Testament as well as in the New Testament, God is very frequently presented under the title of the highest judge, whose absolute sense of justice and incorruptibility is the point of departure for the rejection of all perversion of justice out of the lust for money and power. That shows that the topic of corruption in the Bible and in Judeo-Christian ethics is at the top of the agenda.”

“A society with corruption can, by definition, not be a just society. God is one who shows no partiality and accepts no bribes (Deuteronomy 10:17), for with the Lord our God there is no injustice or partiality or bribery (2 Chronicles 19:7),” Schirrmacher adds. “The topic of corruption shows, therefore, how little one can separate personal sin from societal sin in the Bible. There are always individuals participating in corruption, and yet corruption is an evil to which an entire network of evil structures belong and that can bring an entire society down into the abyss. This is due to the fact that it can eat up those who are responsible in all areas of the society, i.e. in the church, in commerce, and in the state political and administrative structures.”

The upcoming online conference will build on the success of the two previous conferences that brought together evangelical leaders from some 70 countries, focusing on “strategies for living in integrity” and “anti-corruption: perspectives and practices.” Speakers include Manfred Kohl, Re-forma and GIN, on “Integrity begins with me”; David Bennet, Lausanne Movement, on “The Church: A bastion of integrity and a bulwark against corruption”; Thomas Schirrmacher, WEA, on “a global strategy against corruption”; and Livia Krings, UNODC, who will present UN initiatives on anti-corruption. WEA Global Ambassador and GIN Co-Catalyst Bishop Efraim Tendero will moderate the conference.