Evidence of Herod’s green thumb, Roman crucifixion methods, and Philistine bananas add to our understanding of the world of the Bible.

Archaeology takes years, decades, and even half centuries. The painstaking work of digging and sifting is followed by longer stretches of waiting, analyzing, and interpreting. But the past 12 months have seen regular announcements of developments and discoveries—some expected but some quite surprising—that deepen and broaden our understanding of the world of the Bible.

From the breaking archaeological news of 2021, here are the top 10 stories:

10. Herod the Great’s green thumb
King Herod—best known in the Bible for ordering the deaths of any infants who might be Jesus’ age—turns out to have had a gardening hobby. Soil samples from excavations at his Jericho palace, taken almost a half century ago, were recently analyzed, and the pollen particles revealed sophisticated horticulture.

Miniature pine, cypress, cedar, and olive trees grew in clay pots that were originally recovered by archaeologist Ehud Netzer. Many of the tree species would not typically have grown in the desert around Jericho, making the garden a demonstration of Herod’s greatness, a horticultural feat to impress guests and subjects. 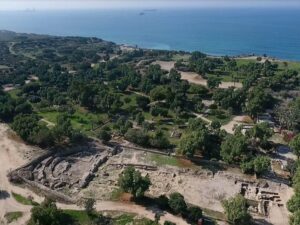 The Israel Antiquities Authority announced the rediscovery and preservation of Herod the Great’s basilica in Ashkelon. Herod was known in his time for the dramatic locations of his palaces and fortresses, and this Roman-style construction, a public building for community activities, was no exception.

The huge edifice, larger than a football field, was first excavated over a century ago but is now being reexcavated and developed to attract visitors to the Tel Ashkelon National Park. The final reconstruction will include a small ancient theater called an odeon, marble pillars and capitals, and huge marble statues of pagan deities.

8. A biblical pharaoh’s border monument
Discovered in a farmer’s field in northeastern Egypt, this inscribed monument bears the name of one of the few pharaohs actually named in the Old Testament. Hophra led an Egyptian army into Judah to help King Zedekiah resist an invasion by Babylonian King Nebuchadnezzar. The ploy was only temporarily successful, and true to the prophecy in Jeremiah 44:30, the pharaoh was killed by his enemies after a disastrous foray into Libya.

The stele contains 15 lines of hieroglyphics, so far untranslated. Mostafa Waziry, secretary general of the Egyptian Supreme Council of Antiquities, described it as a border stele which “the king erected during his military campaigns towards the east.” This raises the intriguing possibility that it might describe Hophra’s campaign to support Zedekiah. 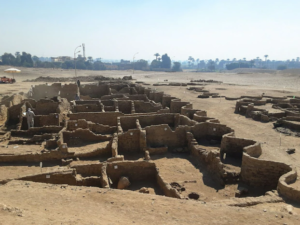 Archaeologists announced the discovery of a previously unknown city on the west bank of the Nile near Luxor. Believed to be one of the largest Egyptian cities ever unearthed, it dates to the reign of Pharaoh Amenhotep III. This pharaoh was the grandfather of Tutankhamun but, more importantly perhaps, the grandson of Amenhotep II, believed by many evangelical scholars to be the pharaoh of the Exodus.

The city appears to have been suddenly abandoned. The inhabitants may have been driven out of their homes when Amenhotep IV, better known as Akhenaten, rounded up workers to build him a completely new capital city in central Egypt. What remains today may reveal many details of daily life in Egypt around the time of Moses.

6. A crucifixion foot
The Roman practice of crucifixion is well known from ancient sources, including the Gospel accounts of Jesus’ death. But up until this month, the only archaeological evidence of crucifixion had been found in a burial cave in Israel in 1986. In early December, it was announced that a skeleton had been excavated from a grave at Fenstanton in Cambridgeshire, England. The remains had a nail driven into the back of the right foot. The burial dates to around A.D. 400, during the Roman occupation of England. 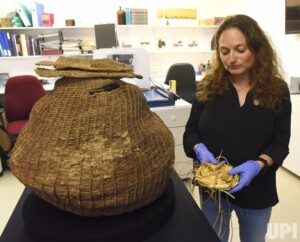 The Israel Antiquities Authority announced the results of a four-year excavation project in hard-to-reach caves overlooking the Dead Sea. Finds included arrowheads, coins, combs, the mummified remains of a young girl, and dozens of scraps of biblical texts. The scroll fragments, containing passages from Zechariah and Nahum, are unrelated to the texts produced by the Qumran community, known as the Dead Sea Scrolls. They nonetheless shed light on the long work of translating and transcribing Scripture.

For archaeologists, the most amazing discovery was a 10,500-year-old basket.

The basket, complete with intact lid, dates to the pre-pottery Neolithic period, making it the oldest basket in existence. It is reminiscent of the biblical baskets, such as the one that held the baby Moses in Exodus, the ones that carried the leftovers when Christ fed the multitudes in the Gospels, and the one that helped the apostle Paul escape persecution, when he was lowered over the wall of Damascus. 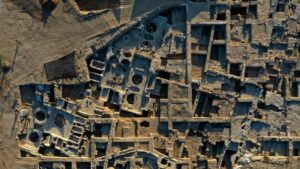 The modern city of Yavne, located between Tel Aviv and Ashdod, has been a prolific site for archaeological discoveries in 2021. The city is growing quickly, and as a large tract of land is prepared for new housing construction, archaeologists are uncovering amazing artifacts.

About 1,500 years ago, Yavne was an industrial center for wine production, producing approximately a half million gallons of wine per year. Archaeologists uncovered five huge winepress production areas, each over half the size of a basketball court, along with four huge warehouses and kilns for firing wine storage jars. They also found an older winepresses from the Persian period, dated to around 300 B.C.

In the decades after the destruction of the Jewish temple in Jerusalem, Yavne became a spiritual center, the home of many rabbis and the Sanhedrin. A building identified with that period has been excavated and a beautiful large mosaic from 1,600 years ago is being restored.

Perhaps the rarest Yavne discovery was an intact chicken egg from 1,000 years ago, found in the remains of a privy. 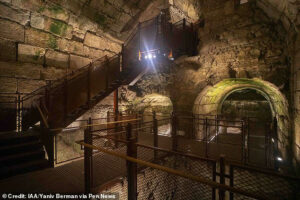 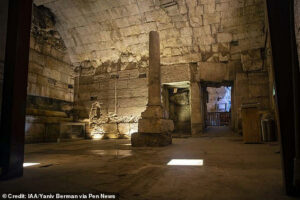 A luxurious public building located next to the Temple Mount has been excavated and opened to public tours. Part of the building was first discovered by British archaeologist Charles Warren in 1867, and the site was partially excavated in 1966. Now that the excavation is complete, archaeologists have dated its construction to A.D. 20—during the lifetime of Jesus.

The building contained two identical chambers, separated by an elaborate fountain. The luxurious nature of the facility and its adjacency to the Temple Mount indicates it was probably used by the elite members of the first-century Jewish community, the families of the high priests, and other leading religious figures.

Archaeologists say it was damaged by an earthquake in A.D. 33, then later rebuilt and reconfigured into three vaulted halls. The destruction date suggests possible evidence of the earthquake recorded in the Gospel accounts at the crucifixion of Jesus. 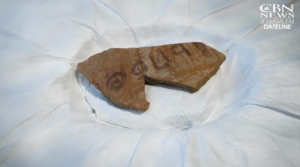 “Jerub-baal” is the nickname given to Gideon in Judges 6:31–32 after Gideon destroyed an altar to the pagan god Baal. It means “Let Baal contend with him.” It’s also the name found written on a pottery jug fragment excavated at Khirbat er-Ra’i, a site near Tel Lachish in southern Israel.

It is unlikely the jug belonged to Gideon himself. Khirbet er-Ra’i is located about 100 miles south of the Jezreel Valley, where the Bible says Gideon took a tiny army and routed a much larger force of Midianites. The archaeologists excavating at Khirbat er-Ra’i dated the stratum where the pottery was found to 1100 B.C., the period of the judges, but likely about a century after Gideon, based on the internal chronology of the Bible.

There is little archaeological record of this period, though, so the discovery linking a biblical name to the era is notable.

The level of literacy in the Old Testament is still a matter of debate among scholars. Interestingly, the story of Gideon references a young man who “wrote down the names of the 77 elders of Sukkoth”(Judges 8:14).

1. A second synagogue in Magdala 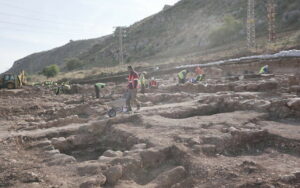 The University of Haifa announced the discovery of another first-century synagogue at Magdala in late December, located on the northwestern shore of the Sea of Galilee. The first Magdala synagogue, discovered a dozen years ago, was notable because it was in use before the destruction of Jerusalem, when worship was still centered at the temple. Now there are two.

Only a handful of first-century synagogues have been excavated in Israel. Of those, these are the ones most likely visited by Jesus during his ministry (Matt. 4:23) because of their location near the Nazareth-to-Capernaum road and their association with the hometown of Mary Magdalene.

This second synagogue, located less than 200 yards from the first, was discovered while preparing for a road-widening project. It “is now changing our understanding of Jewish life in this period,” according to the Israel Antiquities Authority. Many scholars had thought synagogues flourished and took on a more religious function only after the destruction of the Jerusalem temple. This new evidence seems to indicate that synagogues, which were more like community centers in their early days, included more religious activities.

Bonus: Philistine bananas
We know that King Solomon fed his guests beef, lamb, venison, and poultry, in addition to bread, cakes, dates, and other delicacies. But … bananas?

The amount of water needed to grow bananas makes them an unlikely fruit in ancient Israel, but a new study published in the Proceedings of the National Academy of Sciences reported some unexpected remains were scraped off the teeth of Canaanites and Philistines who died in the late second millennia B.C., the period of Solomon’s reign. Teeth don’t lie: They ate bananas.

The dietary evidence indicates “a dynamic and complex exchange network connecting the Mediterranean with South Asia,” according to the report. Christina Warinner, a Harvard anthropologist and one of the lead investigators, said the imported fruit may have been dried, like modern-day banana chips.

Gordon Govier is the editor Artifax, a quarterly biblical archaeology newsmagazine, and host of the podcast The Book & The Spade.