Ash Wednesday Forces Us to Confront Death, but It Also Offers Hope 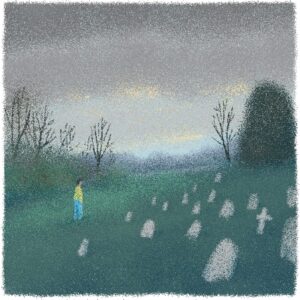 Several days a week, on the way from my home to the nearest coffee shop, I pass a cemetery. Among hundreds of others lie the graves of my father, grandmother and grandfather. It’s an almost daily reminder of their lives but also that I will join them someday, perhaps even in the same graveyard. It’s an unbidden memento mori in an ordinary day.

We as a culture tend to strenuously avoid the fact of human mortality. Of course, we all know that we will die. But those of us who live in places that feel safe and who are relatively healthy, with friends and family who are relatively healthy, can arrange our lives to avoid thinking about death. With the blessings of modern medicine, people are living longer and when death comes it often happens in medical spaces, far from where most of us live and spend our time.

Gone are the days when graveyards frequently circled churches, a bygone reminder of the intrinsic connection between our mortality and our practices of faith. Cemeteries are often no longer near cities at all. In a Times profile of Colma, a small California town where many of San Francisco’s dead have been buried or reinterred, John Branch wrote, “Colma exists mostly because the deceased, like so many present-day workers in San Francisco, could no longer afford to live in the city.” As prices rise for urban spaces, burial grounds are moved farther out of town, and urban dwellers are left with few palpable reminders of death. Death itself, like cemeteries, becomes a distant and forgotten reality.

This Wednesday is Ash Wednesday, which begins the Christian penitential season of Lent. On Ash Wednesday, churchgoers usually kneel and our foreheads are marked with ashes in the shape of a cross. An Ash Wednesday service was one of the first liturgical services I ever attended. And it hit me hard. We, the living, gathered to name the fact of death. The priest marked the foreheads of children, even newborn babies. It felt so true and countercultural, and also incredibly sad.

I have since presided over several Ash Wednesday services as a priest, and it still hits me hard. In the service, I tell the members of my congregation, one by one, “Remember that you are dust, and to dust you shall return.” This black mark o death rests on every forehead – the young and old, rich and poor, strong and weak, sick and well. We carry on our body a recollection and proclamation that we, and everyone we love will die.

The church has long said that facing death, without denial or distraction, is a necessary part of living truthfully. And this truth, like all truth, teaches us how t o live IN the Rule of St. Benedict, Benedict urged his monks: “Day by day remind yourself that you are going to die. Hour by hour keep careful watch over all you do, aware that God’s gaze is upon you, where er you may be.” Benedict understood that recalling death changes us.

Speaking the truth of mortality out loud on Ash Wednesday feels somehow transgressive. IN the midst of the bustle of cities, the busyness of our lives, the triviality that subsumes much of our time and the unreality of social media, a priest stands with ashes in hand and calls people back to reality.

Amid the mountains of sociological data about life in a pandemic over the past two years, one weird statistic caught my eye. Christianity Today reported on an annual funeral industry study that showed that after a decade of steady decline, the percentage of people age 40 and over who say that religion is “very important” in the funeral of a loved one spiked by 10 percentage points in 2020 and rose another 2 percentage points in 2021.

Covid’s specter of mass death challenged any flimsy hope that we can control our lives and be rescued from mortality, loss and pain. For many of us, facing the immovable fact of death quite naturally raises questions about God. With nearly a million lives lost to Covid in the United States alone, more people find themselves longing for religious rituals that acknowledged mystery, meaning, horror and hope in death.

Oftentimes, by avoiding the truth of death, we end up stifling questions about the meaning of life, about God, about eternity and about who we are, what we are for, where we are headed and why anything matters at all.

I experience this all the time. Karl Marx famously called religion the opiate of the masses. He meant that faith can have a numbing affect, quelling hard questions and hampering the work of justice in the here and now. He has a point. Religion has at times been used as an excuse by some to not work for change and to embrace a pie-in-the-sky quietism. Still, in my own life, any numbing effects of religion don’t hold a candle to binge-watching Netflix with a pint of Ben & Jerry’s and a bourbon on the rocks. Like morphine, the leisure of consumerism and creature comforts dull my notice of life, death, longing and the pressing struggles of this world.

A fascinating 2014 study by The Times The Upshot looked at the most difficult places in America to live, based on factors such as life expectancy and income level, and then compared common internet search terms there with those form the easiest – and wealthiest – place to live. What they found was that those in the hardest places spend time thinking about health woes and religion. People in America’s easiest places think about jogging and cameras.

On a global scale, this divided reality is even clearer. A 2008 Pew study shoed that “Generally, there is a clear relationship between wealth and religiosity: In rich nations fewer people view religion as important than in poor nations.” People who live in the world’s poorest nations almost unanimously said religion was important to them, while people in Western Europe and in other wealthy nations said it is less significant.

Even the book of Proverbs in the Bible acknowledges this tendency. The book’s writer asks for daily bread, acknowledging that if he became desperately poor, he’d be tempted to steal. But he also asks God to deliver him form riches, “Otherwise, I may have too much and disown you and say, ‘Who is the Lord?'”

There are myriad reasons that wealth might dampen faith. But one is that those of us who are privileged and comparatively comfortable can insulate ourselves from death, suffering and our own mortality in ways others cannot. Whether one is a churchgoer or not, when our bodies are strong, our stomachs are full, and we have high-speed internet and crat beer, questions of eternity seem less pressing.

These Covid years, though, asked us to face the inescapable fragility of all our lives. Each year, Ash Wednesday asks the same.

But Ash Wednesday doesn’t end with an invitation to distraction or consumer comfort. Nor does it end with the imposition of ashes. After the ashes, int eh Anglican Book of Common Prayer, the priest asks that “at the last we may come” to God’s eternal joy. Then we take Communion together, a tangible decree that ashes give way to beauty, that death gives way to resurrected life.

The Catholic priest and writer Henri Nouwen called the hope of Christianity – the hope of Ash Wednesday – a “transcendent realism.” Transcendent realism confronts the truth of the grave. And it is in this truth that the most important questions of our lives get a hearing. We need more than diversion, work and pleasure. We need deep, resonant, defiant hope.

Tish Harrison Warren (@Tish_H_Warren) is a priest in the Anglican Church in North America and author of “Prayer in the Night: For Those Who Work or Watch or Weep.”