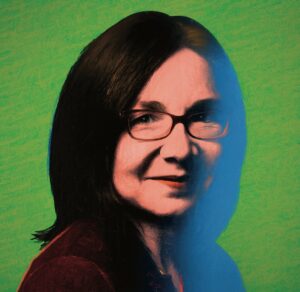 Such is the grimly politicized state of science these days that the descriptors typically used to explain who Katharine Hayhoe is – evangelical Christian; climate scientist – can register as somehow paradoxical. Despite that (or, indeed, because of it), Hayhoe, who is 49 and whose most recent book is “Saving Us: A Climate Scientist’s Case for Hope and Healing in a Divided World,” ha become a sought-after voice for climate activism and a leading advocate for communicating across ideological, political and theological differences. “For many people now, hope is a bad word,” says Hayhoe, the chief scientist for the Nature Conservancy as well as a professor of political science at Texas Tech. “They think that hope is false hope; it is wishful thinking. But there are things to do – and we should be doing them.”

Where, if any, are there areas where you see a conflict between scientific consensus and your religious beliefs? The biggest struggle I have is that in the Bible, Jesus says to his disciples, “You should be recognized as my disciples by your love for others,” and today when you look at people who self-identify as Christians in the United States, love for others is not one of the top characteristics you see. Christianity is much more closely linked with political ideology and identity, with judgmentalism, partisanship, science denial, rejection of responsibility for the poorest and most vulnerable who we, as Christians, are to care for. You know, there was a really interesting recent article about the landscape of evangelicalism in the United States, and it said that about 10 years ago if you asked people, “Do you consider yourself to be evangelical?” and they said yes, and then you asked, “Do you go to church?” about 30 percent would say no. But nowadays something like 40 percent of people who self-identify as evangelicals don’t go to church. They go to the church of Facebook or Fox News or whatever media outlet they get their information from. So their statement of faith is written primarily by political ideology and only a distant second by theology. 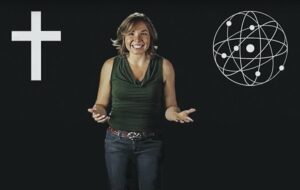 Katharine Hayhoe in the PBS series “The Secret Life of Scientists and Engineers” in 2011.

I wonder if, at least insofar as climate-change skepticism goes, that’s too easy of an explanation. Because if we think of an evangelical Christian as someone who believes that God gave man dominion over the Earth, that God and not humanity is going to decide when our world ends, and add to that, as you wrote in “A Climate for Change,” “As Christians, we’re naturally suspicious of people who believe differently from us” – doesn’t that seem like a recipe for a climate-change skeptic even before you add in political ideology? What you descried is sort of the chicken and the egg. So, Mark Noll is a historian at Notre Dame. He wrote a book in 1994 called “The Scandal of the Evangelical Mind.” In it he tracked how the political evolution of the United States directly related to how people viewed religion from an increasingly nationalistic and individualistic perspective, an increasing rejection of authority. Noll’s book, even though it was written so long ago, shows how the land had already been cleared, tilled and sowed for when the Moral Majority came along in the 1980s. They took advantage of those fertile fields to deliberately politicize religion in in America They couldn’t have succeeded if it wasn’t for this trend over the last hundred years to conflate individualism and American culture with theology.

Doesn’t the argument that the evangelical church has been so totally co-opted by political ideology imply a sort of dim view of its followers’ ability to think critically for themselves? Oh, totally. There was an article in The Atlantic by Peter Wehner that had a good comment from Alan Jacobs, a Baylor professor. He said churches are not catechizing. People might show up for one hour on a Sunday morning, and half of that is singing, and there’s some entertaining talking because they want to keep people coming in the door because that’s how you fill the coffers. Churches are not teaching and people are spending hours and hours on cultural and political content and that is what is informing our beliefs.

You talk a lot about the importance of trying to communicate with people outside of our respective bubbles. You do that out of necessity because you’re doing the work you do while living in an conservative part of a conservative-leaning state. Where might cross-ideological conversations, particularly about climate change, happen for people who aren’t in similar situation? So here’s the interesting thing: Your question contains a misconception. The misconception is that climate action isn’t occurring because of the people who aren’t on board with it. The reality is that more than 70 percent of people in the U.S. are already worried about climate change, and about 35 percent of those ware really worried. So the biggest problem is not the people who aren’t on board; the biggest problem is the people who don’t know what to do. And if we don’t know what to do, we do nothing. Just start by doing something, anything, and then talk about it! Talk about how it matters to your family, your home, your city, the activity that you love. Connect the dots to your heart so you don’t see climate change as a separate bucket but rather as a hole in the bucket of every other thing that you already care about in your life. Talk about what positive, constructive actions look like that you can engage in individually, as a family, as an organization, a school, a place of work. Add your hand to that giant boulder. Get it rolling down the hill just a little faster. Even if we live in a progressive bubble, most of the people are not activated, and we activate them by using our voice.

Is not knowing what to do still a viable excuse for anyone? There’s supporting politicians who have strong environmental platforms. There’s eating less meat. There’s pursuing green energy options. Isn’t it easy to figure out things to do? It is, but we’re so individualistic that it affects our perspective on climate solutions. We think it’s all about us and then we’re racked with guilt over the bottle that we didn’t recycle or the hamburger that we ate. You could feel like you’re doing everything possible to cut your personal footprint, and that would be a tiny fraction of the solution. When we realize that as individuals we can’t fix it, that’s where despair comes in. And if we don’t realize that we have a shadow, not just a footprint we feel like there’s nothing we can do because all we see is companies squabbling and avoiding action and the government in deadlock. I mean, I get discouraged and depressed reading about that stuff. That’s why we need to make people aware that, yes, our personal actions do matter but they matter because they can change others. When we take that extra step of saying: “Hey, I tried a Beyond Meat burgers, and it was delicious. Let’s go to this place for lunch and give it a try together.” Or: “I reduced my food waste. Have we though about composting in our cafeteria?” If you take those kinds of actions, all of a sudden you’ve got 30, 50, 100 more people whose hands are on the boulder beside you, and you realize, hey, we might have a shot at fixing this. 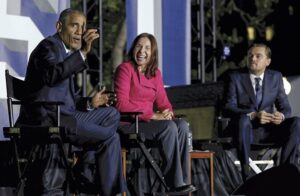 Hayhoe with President Barack Obama and Leonardo DiCaprio at the South by South Lawn event at the White House in 2016.

How do you see rational thinking and emotionally driven behavior as working together – or not – in this context? That is something that I have thought about but nobody has ever asked me before. I think it’s Jonathan Haidt who says that we think that people use information to make up their minds but they don’t. People use what Haidt calls our moral judgement. We use moral judgement to make up our minds and then use our brains to find reasons that explain why we’re right. There’s no way to separate the emotional from the logical. We think it’s possible to convince people to act rationally in their best interests: Well, look at people who, as they are dying, are rejecting the fact that they have Covid. Look at people who are still rejecting simple things like taking a vaccine and wearing masks. We are primarily emotional, and emotions are engaged deeply with climate change because it brings up the most profound sense of loss: People on the right, for example, deeply fear losing their liberties because of climate solutions. So what we need to do is to show everyone how climate solutions are not only not incompatible with who they are but help more genuinely express who they are and what we care about; make us an even more-genuine advocate for national security, and even stronger supporter of the free market, an even more independent person or, in my case, a more genuine expression of my faith.

Does our current situation ever make you doubt? It does not make me doubt the existence or the goodness of God. It makes me doubt God’s ability to act in people who call themselves his followers. I had an interesting experience a few years ago: I was visiting a university, as I often do, doing a luncheon event with a group of early-career women. One of the administrators stuck their head in and said the dean wants to talk to Katharine. They ushered everybody out and then the dean came and sat down and said, “I used to be an evangelical.” So I asked the obvious question: “Why are you no longer?” He said: “It wasn’t because I doubted the existence of God. It’s because I couldn’t see any evidence of God working in people I saw person after person who claimed that they took the Bibles seriously, they were Christian” – I’m paraphrasing – “and all I saw was the opposite of love. It got to the point where I couldn’t see any evidence of God working in people.” That’s what I’ve struggled with, too. What breaks my heart is the attacks I get from people who identify as Christians. When someone on Twitter has just called me a whore and I go to their profile and it says something about “loving others” and “so blessed” it makes me feel so discouraged. I’m thinking, God, what are you doing?

How do you understand it? When that happens, almost always within a day or two or sometimes even within an hour, I hear from somebody who is expressing love and joy and peace and patience and kindness – the fruits of the spirit – and who encourages me again. Part of the active hope is recognizing that there are people out there who are motivated from the heart, who are expressing love for others. Some of them call themselves Christians and some of them don’t, but those expressions restore your faith in the goodness of people, in the goodness of creation and, ultimately, the goodness of God. But, yes, I certainly have moments when I just say, “God, where are you?”

This interview has been edited and condensed from two conversations.

David Marchese is a staff writer for the magazine and the columnist for Talk. Recently he interviewed Brian Cox about the filthy rich, Dr. Becky about the ultimate goal of parenting and Tiffany Haddish about God’s sense of humor.