30 Years of Rebirth of Evangelicalism in Albania

30 Years of Rebirth of Evangelicalism in Albania 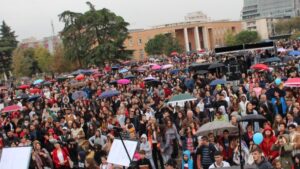 Thousands gathered to celebrate 30 years of religious freedom in Tirana on November 14, 2021.

The amazing story of God’s work in Albania has deep roots that go back to the first preaching of the gospel by the Apostle Paul to the Illyrians, the ancestors of today’s Albanians in the first century (Romans 15:19).

The more recent secondary roots of the Evangelicals in Albania go back to the great contribution of British and American missionaries in the first decades of 1800s with the publication of the first Bible in Albanian in 1827.

But the devastation of the atheistic Communist regime of Albania was so complete that only 13 or 16 Evangelical believers were alive when Albania regained freedom in 1991.

The amazing part of the story is that in less than 30 years God resurrected from ashes, that burned down stump of the Evangelical Church in Albania, to the point that today we have churches in every corner of Albania, about 200 Evangelical churches of all kinds of denominations.

They have joined together into the Evangelical Alliance of Albania (VUSH) and are represented as one distinct community to the Albanian people earning also the official recognition of the Albanian government as an official religious community in 2011. 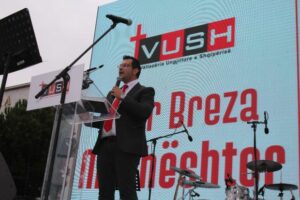 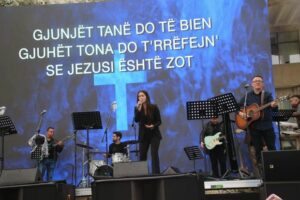 In 2018 the Evangelical Alliance of Albania became an equal member of the Inter-Religious Council of Albania (KNFSh) where all of the official religious communities of Albania (Muslim, Orthodox, Catholic, Bektashi, Evangelicals) are represented with their respective chairman or archbishop.

The Evangelical Alliance of Albania will assume the role of Chairman of IRCA/KNFSH for the first time this coming year of 2022, signifying an amazing opportunity to show the world not only what God can do in a seemingly impossible situation after the devastations of totalitarianism, but also the admirable interreligious environment of Albania where a community of converts from other religions are accepted as an equal among the people of those religions from where they sprang forth to live in peace and harmony together bringing rare honor to the Albanian nation.

On 12 October the Evangelical Alliance of Albania celebrated the 30 year re-evangelization of Albania, along with the umbrella organization of all missionaries in Albania (AEP).

AEP was instrumental, not only in bringing the fire of the gospel from the earliest days of freedom in 1991, but was also the main factor in forging the unity of all Evangelicals from the very beginning of the establishment of young churches all over Albania.

This unity of missionaries in Albania receives much praise and it is highlighted as an exemplary Christian achievement for the whole world.

On 14 November, in the center square of the capital city of Albania, right where the very first Evangelical activities started in 1991, the burgeoning evangelical church of Albania, with representatives of churches from all over the country, gathered to celebrate 30 years of freedom of religion and the fruitfulness of the gospel proclamation in Albania.

After 30 years of religious freedom, after 30 years of unhindered and beautiful growth of the Albanian Church, we are not under the illusion that the political weather would not change, affecting the freedoms we have enjoyed in these 30 years.

While the mood and celebration, with our characteristic Evangelical singing, was bright, the actual weather was gloomy and rain started to fall, which was pointed out from the stage as an illustration of the nature of our mission in this world:

The Church of our Lord Jesus Christ in Albania and everywhere will continue to worship and proclaim the good news of His salvation in good weather and bad, in freedom and in persecution, in season and out of season, just as our King asked us to do because He is with us until the end of the world.