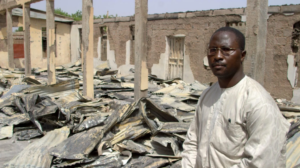 Islamist extremists are gaining ground, not only in Nigeria, but also in the Sahel region of sub-Saharan Africa. In Burkina Faso, jihadists targeted Christians in the north of the country in 2021, forcing churches to close and meet in secret.

Attacks ranged from bombings, killings, kidnappings and school burnings to assaults on religious leaders and places of worship.

The Global Terrorism Index says the faction behind most of the killings is Islamic State in the Greater Sahara.

“The situation facing Christians in Burkina Faso is now similar to Nigeria,” says a partner of Release International. Pressure in the region is likely to continue in the coming year, particularly following the drawdown of French troops in Mali.

Similar pressure is building in neighbouring Nigeria, where attacks by Boko Haram terrorists, IS fighters and Fulani militia continued throughout 2021. Release partners have described a​“slow-motion war where more Christians are being killed than anywhere else on the face of the earth.”

“Churches, church leaders and Christian communities remain the primary targets,” says another Release partner.​“The attacks by the Fulani now include kidnappings for ransom.”

2021 was a tumultuous year for Afghanistan, with the Taliban taking over the country.

“Christians are afraid of being reported by family members or neighbours, and fear violent treatment by the Taliban,” says a Release International partner, who received reports of​“homes being searched and some individuals receiving threats”.

Release CEO Paul Robinson says:​“In 2022, there is a very real threat of higher levels of violent persecution in Afghanistan.

“Our partners tell us that Christians who are unable to follow the outward forms of Islam, such as praying at the mosque and saying the shahada, the Islamic profession of faith, will stand out more clearly. This increases their vulnerability to persecution and the pressure on them to conform.”

A poor harvest and a major breakdown in the Afghan economy caused severe food shortages in 2021, and these could get worse in the coming year.​“Lack of work and food is a major problem for everyone,” says a Release International partner.​“Known Christians are likely to face discrimination.”

Food insecurity is also a major concern in North Korea, where observers warn famine could be looming again. As winter tightens its grip, many could face imminent starvation. In the 1990s, up to 3.5 million North Koreans died of hunger.

Further instability in the country could lead to increased persecution in what is already one of the most hostile countries to Christianity in the world.

There is a complete prohibition on Christian identity and activities in North Korea. Christians who are discovered face severe penalties. These include imprisonment in labour camps likened to concentration camps, and execution.

Despite the brutal persecution of Christians, the church in North Korea is growing, according to Release International partner, Dr Eric Foley. During the Covid-19 pandemic, he found requests for Bibles increased dramatically, since the authorities were forced to reduce their house-to-house searches to avoid infection.

“Let’s pray that not only the gospel continues to spread, but that the church beyond is encouraged and strengthened by the witness of North Korea’s underground Christians,” says Dr Foley.

Another country of growing concern for Release International is India, where attacks against Christians are rising and more states are imposing anti-conversion laws. This comes as growing numbers of the Indian underclass, the Dalits, are turning to Christianity.

Right-wing Hindu nationalism is on the rise. Militant Hindus have called for religious conversion from Hinduism to be made illegal across the country. Many states have already passed anti-conversion laws and Karnataka is following suit.

The laws, which ostensibly prohibit forced conversions, are being used to prevent any form of Christian witness. They have been used as a pretext for growing militant attacks on expressions of Christianity.

Hindu militants have attacked Christian schools and broken into churches, to impose acts of Hindu worship during Christian meetings.

Over Christmas, the police advised church leaders in Karnataka State not to hold Christmas services, as they were unable to guarantee the protection of Christians from Hindu militants.

In a recent attack in Belagavi, Karnataka, Christians had to be freed by the police after militants chanting Hindu prayers locked them into their meeting hall. This followed protests by Christians over the proposed anti-conversion law.

“In many nations, we see a rising tide of intolerance towards Christians, accompanied by a rise in violence,” says Paul Robinson of Release International.

“Islamist militants are becoming more aggressive in Africa, as they attempt to drive Christians from the land.

“Now the violent intolerance of these insurgents is being mirrored in India, where we see right-wing religious nationalists attempting to eliminate the Christian presence in parts of the country.

“Intolerance and persecution are set to get worse with growing food and climate insecurity.”

Andrew Boyd is a writer, journalist and spokesman for Release International, which serves persecuted Christians around the world. His latest book: Neither Bomb Nor Bullet, the biography of campaigning Nigerian Archbishop Benjamin Kwashi, is available from Release International or Amazon.