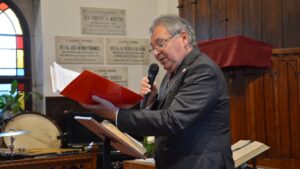 On 14th November the centenary was celebrated in the Igreja do Mirante, the oldest evangelical church in Porto.

On 14th November the centenary of the creation of the Portuguese Evangelical Alliance (AEP) was celebrated in the Igreja do Mirante, the oldest evangelical church in Porto. It is a beautiful Methodist building full of light.

The gathering was part of a series of activities organised by our Portuguese brethren, which also included a historic event, a virtual exhibition, an itinerant exhibition, and the upcoming publication of a book. Looking at the AEP’s history, it was interesting to see the parallelisms with the history of the Spanish Evangelical Alliance. This encourages us to give our cultural and physical proximity more meaning, based on our condition of spiritual unity.

The event was conducted by the Portuguese Evangelical Alliance’s president, António Calaim, alongside with its executive secretary, Josué Da Ponte.

It was a joy to greet again brothers and sisters in person, such as Frank Hinkelmann, president of the European Evangelical Alliance, or Connie Duarte, vice-president. Members of other entities were also present. 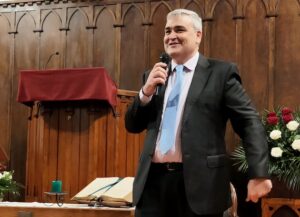 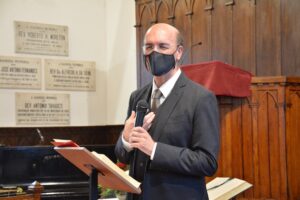 The gathering started with greetings from several organisations, beginning with the Spanish Evangelical Alliance. I proposed that the Apostle Paul would not have much difficulties in convincing the Portuguese Evangelical Alliance and the Spanish one about the fact that “there is no longer Jew or gentile”, because beside being brethren in the faith, we share a cultural unity, especially those of us who are from the nearby Galicia. I recalled that one year after the foundation of the Spanish Evangelical Alliance, in 1877, the Alianza Evangélica Luso-Española was founded – so why not giving continuity to this idea by designing ways of collaboration for the progress of the Kingdom in both countries?

The proposal was later picked up by Josué Da Ponte, and we could right there explore potential projects of collaboration, in areas such as the media communication and historical research (in this second case putting in touch the respective key people of our Alliances, Timóteo Cavaco and Evangelina Sierra).

After greetings from other institutions, an interesting roundtable happened next. Timóteo Cavaco and Jorge Humberto Nobre, the former president, narrated the most relevant events of the Portuguese Alliance’s history. Several hymns and prayers followed, and Frank Hinkelmann closed the ceremony with an interesting conference about the elements that define the evangelical identity, those in which we all agree, and the need to link what we believe with what we live. He also underlined the need to avoid inadequate connections of the Church with whatever political movements.

It was not difficult to feel at home in this gathering, with a clear conscience of unity in the faith, which manifested itself not only in what we shared in words, but especially in prayer and in song. It was touching to sing in Portuguese with our brethren. If we found a stranger and wanted to make sure he is an evangelical, we would ask him to recite John 3:16, but we could also ask him to sing “How Great Thou Art”. It was very moving to sing the Portuguese version, “Grandioso es tu”, and to discover a word that reaches the heart of every Galician: “levarme ao lar”, because “o lar” (the fire of the home) brings one to the deepest of its identity, what poetess Rosalía de Castro called in her best poem “miña casa, meu lar”.

At the end we shared the centenary cake, and especially, and excellent vinho do Porto. As the executive secretary told me, the arrival of the gospel to Portugal was very much linked to the commerce of this wine by the British, a happy connection that had to be duly celebrated.

The Portuguese and the Spanish Alliance share what we believe and feel. Recalling the words of the president of the European Alliance, we will need to start sharing what we do as well.

Josué Da Ponte said goodbye to me saying: “For us, your presence as Spanish EA has been very important”. For us it was important as well. May the Lord guide us to translate the affection and spiritual unity in practical initiatives of collaboration.